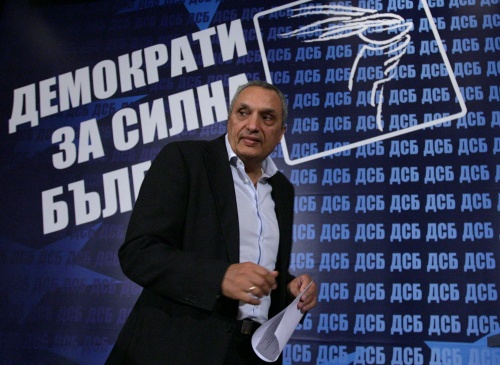 Leader of rightist Democrats for Strong Bulgaria and former PM Ivan Kostov launched a comprehensive criticism of the GERB cabinet's economic policy at a press-conference Monday. Photo by BGNES.

The Bulgarian economy is doing very badly and the GERB cabinet is doing little to help it, stated Ivan Kostov, leader of the rightist Democrats for Strong Bulgaria.

Kostov thus renewed and sharpened ongoing criticism from his party and fellow Blue Coalition members Union of Democratic Forces against the center-right government of PM Boyko Borisov on the eve of the new session of Parliament starting Tuesday.

In Parliament, the Blue Coalition has been consistently voting in support of the cabinet, who has the official support of the 117 GERB MPs (out of a total of 240).

Monday Kostov used picturesque language, likening the Bulgarian economy to a bear that is retiring to its den in the shade of gray economy.

He further deplored drastically shrunk state revenue from VAT and excise, which according to him is only 17% of the amount collected for 2009.

Kostov vowed to pressure the parliamentary budget committee to launch an investigation on the activities of governmental agencies such as the National Revenue Agency and Customs Agency.

The rightist leader and former Bulgarian PM (1997-2001) turned his criticism to a blanket affair by also targeting budget cuts to hospitals and in general delayed payments from the state budget to health establishments and businesses alike.

Kostov further voiced concern about the state of unemployment in the country, saying that the official numbers referring only to persons registered with the social services might not reflect the actual condition of the labor marked.

The Democrats for Strong Bulgaria leader said that during the first plenary on Wednesday the party's parliamentary group will come out with a declaration laying out its full position.