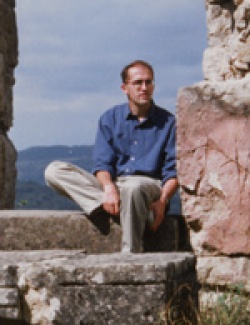 An interview of Novinite.com (Sofia News Agency) with Dr Antony Eastmond, reader in the history of Byzantine art at the Courtauld Institute of Art, London.

Antony Eastmond read History at Oxford, before coming to The Courtauld where he took his MA in Byzantine art and PhD in art in medieval Georgia. After two years as British Academy Postdoctoral Fellow at The Courtauld, in 1995 he moved to Warwick University as Research Fellow. In 2001 he was appointed Reader in the History of Art and Chair of Department at Warwick. He returned to The Courtauld as Reader in the History of Byzantine Art in 2004. He sits on the Wardrop Trust of the University of Oxford and was on the executive committee of the Society for the Promotion of Byzantine Studies 1996-2010. What is the probability that relics, which Bulgarian archaeologists claim to be John the Baptist, would have been placed under the altar on Sveti Ivan?

Highly likely. It was standard practice, usually required, that relics be placed under the altar of a newly consecrated church in order to ensure the sanctity of the church.

The case for the relics, as promoted by the excavation leader Kazimir Popkonstantinov, mixes fact with hypothesis. Does this weaken his arguments?

I have been away and have not been able to read Popkonstantinov's arguments so cannot comment on this.

Is the question of any relic's origins more a matter of faith than historical methodology?

Clearly scientific techniques can date the age of relics, but can never confirm whether they belong to a particular saint. The complex history of the early centuries of Christianity mean that it is rarely possible to trace the provenance of any relics before the fourth century AD. Therefore there is usually a gap of at least 300 years between the burials of those mentioned in the New Testament and the first records of their tombs being venerated. We must rely on the records and beliefs of the early Christians who first recorded these sites and their relics. Do you think the early monastic settlers genuinely believed these are holy relics?

Is this sufficient to tout them as belonging to John the Baptist?

The beliefs of the settlers are clearly important, but cannot stand as proof that would satisfy modern scientific enquiry. However, the length of time over which these relics have been venerated gives them a spiritual authority of their own, regardless of their 'actual' identity. It is this that is most important, in my opinion.

Is Christianity a little cavalier about the historicity of relics?

Throughout history, Christians have been concerned to authenticate relics, and have voiced scepticism when they believe relics to have been fabricated (usually for profit). However, the requirement to document and validate relics is relatively modern, so there have been many centuries in which relics were acquired without any corroborative evidence.

Do you think that this particular matter requires more study?

Yes, these are clearly of great importance in Bulgaria, and deserve further study. What is the importance of relics in early Christianity?

Relics (either the bodies of saints, or objects that had touched Christ, his mother or saints), enabled Christians to get closer to God. They provided a physical focus for devotion, and were often considered to be capable of performing miracles (healing, protection from enemies etc.).

They additionally had political importance, as the most holy relics were collected and possessed by church authorities and members of the royal families of the early Christian world (the Byzantine imperial family, and later the royal families of Christian states such as Bulgaria, Georgia, Serbia etc.). Therefore to own a relic was a symbol of membership of these exclusive, powerful groups.

*The photos are courtesy by Kazimir Popkonstantinov