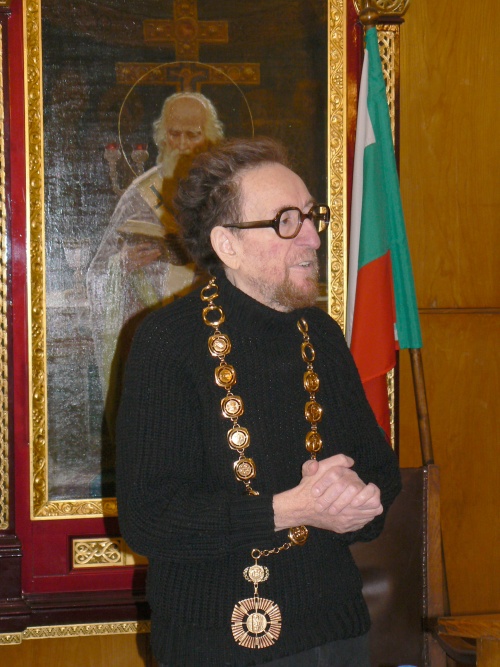 Isaac Passy is pictured here in 2008 as he is awarded the extremely rarely presented academic award of Sofia University, Honorary Sign with a necklace. Photo by BGNES

One of Bulgaria's most renowned scholars, philosopher and specialist in aesthetics Isaac Passy, died Friday night at the age of 82.

Isaac Passy, born in 1928 in the city of Plovdiv, is the father of Bulgaria's former Foreign Minister Solomon Passy (in office 2001-2005).

He is a legend in philosophy in Bulgaria. As a professor of aesthetics, philosophy, and cultural studies, he taught at the Philosophy Department of Sofia University St. Kliment Ohridski since receiving his Ph. D. there in 1957 until 1993 when he retired in protest against a controversial decommunization law.

His works have achieved iconic status for Bulgarian scholars and intellectuals, and he has been described as one of the last “Renaissance figures” in Bulgaria for his wide erudition and philosophical acumen.

His polymathy notwitstanding, his studies put an emphasis on the great age of classical German idealism, pre-existentialism, Russian thought and the essay as a genre.

Not less significant is the other part of Prof. Passy's legacy - that of introducing classical phosophical texts  to the Bulgarian public. Passy organized the translation and edited over 80 volumes of works from the philosophical and aesthetics canon dating from the Antiquity to the 20th century.

Passy was a lively and active figure in Bulgarian academic circles well into his late years. An unforgettable teacher, his lectures attracted literally hundreds, from diverse fields of study at the university.