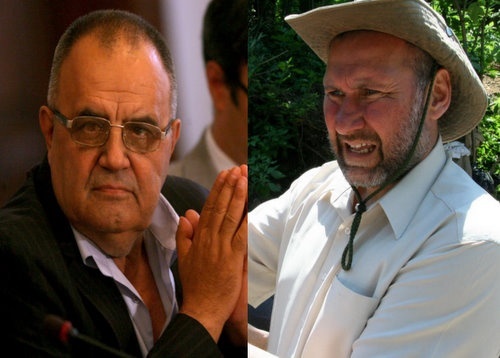 Bulgaria's Diaspora Minister Bozhidar Dimitrov (left) has apologized to Prof. Nikolay Ovcharov (right) for criticizing him as part of a supposed group of researchers who doubted the authenticity of the discovered relics of St. John the Baptist. Photos by

Bulgarian Diaspora Minister Bozhidar Dimitrov has issued an apology to only one person for his statements made after the recent discovery of alleged relics of St John the Baptist, which antagonized the archaeologist in the country.

The Diaspora Minister has apologized only to the most famous Bulgarian archaeologist at the moment, Prof. Nikolay Ovcharov, with who he has been tangled in a personal conflict over the last couple of years.

The renewed fight between the two – and the public outrage against the ministers – broke out over Dimitrov’s statements published in a Sofia daily newspaper last week in which he slammed certain archaeologists for being envious of Prof. Kazimir Popkonstantinov, the man who found the relics of St. John the Baptist, and for criticizing Popkonstantinov and Dimitrov himself for celebrating the discovery before carrying out the proper tests.

“Why, damn it, why, where is all this envy coming from?! This is what I cannot find an explanation with this fucking people, with these fucking colleagues,” the Diaspora Minister and a former Director of the Bulgarian National History Museum, said when expressing his indignation that some of the Bulgarian archaeologists had declared the triumph over the relics of St. John the Baptist premature.

Dimitrov subsequently sought to explain that he did not target anybody in particular with his controversial statements, and that he was generally critical of a group of “anonymous” archaeologists who published statements in the media criticizing the sensational nature of the discovery of the relics of St. John the Baptist in Sozopol last week. He explicitly refused to apologize to anybody for his words and even went ahead with making other controversial statements.

This led to a public condemnation of his statements and ways by the Bulgarian Archaeologists’ Association, and a demand that he should quit politics altogether by his former political home, the Bulgarian Socialist Party.

In a letter to the media on Wednesday, Bozhidar Dimitrov apologized to Prof. Nikolay Ovcharov “for the apparently unfounded suspicion that he is part of the anonymous group of archaeologists who disputed the authenticity of the discovery of the St. John the Baptist relics in Sozopol without having any scientific arguments.”

Dimitrov has motivated his apology with his satisfaction with Ovcharov’s admission on Tuesday about the importance of the Sozopol discovery even though the archaeologist also stated that further tests should be carried out to examine properly the find.

“I wish Bozhidar to be able to keep his nerves a little bit more next time. I accept the apology, and I am glad that the matter has been settled. I know what the euphoria is like when great discoveries are made. This is a moment when a person is somewhere between the land and the sky. But these finds should nonetheless be examined,” Ovcharov commented upon receiving Dimitrov’s apology.

Neither Dimitrov, nor Ovcharov made any mention of their other disputes, including the one that went parallel to the argument about the relics, and had to do with a disparaging statement by Dimitrov that the people of Ancient Thrace – in which Ovcharov specializes – were similar to Bulgarian “mutri”, i.e. former sportsmen turned gangsters from the 1990s, because of their warlike nature and their love for gold.

The recent war of words between him and Dimitrov has rekindled a long-lasting conflict between Bozhidar Dimitrov and Nikolay Ovcharov going two years back in time when Dimitrov claimed he had established the identity of the mysterious muralist of the 13-th century Renaissance like-images in the Boyana Church near Sofia, a UNESCO World Heritage site.

Ovcharov disputed Dimitrov’s claims, which has unleashed a war of words in which both researchers criticized each other’s work and discoveries going as far as outright insults.

Prof. Nikolay Ovcharov is perhaps the most famous Bulgarian archaeologist at present. He is known for researching the ancient Thracian settlements Tatul and Perperikon in the Rhodope Mountains and the medieval Bulgarian capital Veliko Tarnovo. Sometimes called "The Bulgarian Indiana Jones", Ovcharov has been often criticized by his colleagues for seeking to achieve media sensationalism with his public appearances and demonstrations of his finds.

Bulgaria’s Minister without a portfolio in charge of Bulgarians abroad and of state policy on religions, Bozhidar Dimitrov, is a famous historian known for his nationalist views, focusing much of his research on medieval Bulgaria, the ancient Buglarians, Macedonia's role in Bulgarian history, and relations with contemporary Macedonia.

He is a former member of the Council of the Bulgarian Socialist Party, and a former Director of the Bulgarian National History Museum. He is also known to have been a collaborator of the former State Security service of the communist regime spying most notably on the Vatican.

Dimitrov gave up the post at the National History Museum upon joining the Borisov government of the center-right GERB party in the summer of 2009 as a Minister without a portfolio in charge of the Bulgarians Abroad and of religions. Dimitrov is famous for making controversial comments - such as the one that Bulgaria may veto Turkey's EU accession.

At one point Bulgarian PM Borisov joked that he was afraid that some day, upon coming home from a visit abroad, he might find out that Dimitrov had declared war on some of Bulgaria's neighbors.