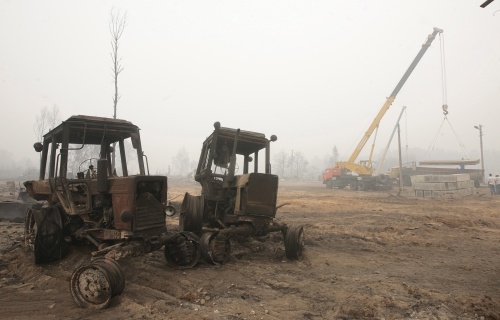 Burnt out tractors stand near a crane unloading basement blocks for new houses in the village of Kryusha, some 270 km south-east of Moscow. Photo by EPA/BGNES.

On account of the raging wildfires Russian authorities declared a state of emergency in the town of Ozersk, where a large Russian center for processing of nuclear materials is located.

Ozersk (Ozyorsk) is located between the cities of Ekaterinburg and Chelyabinsk in the eastern part of European Russia.

Nearby the town of 90,000 is the large-scale Mayak facility, once a source for Soviet plutonium and now processing nuclear waste and materials from old nuclear weapons.

Ozersk is endangered by wildfires that have been ravaging Russia for almost two weeks now (since July 29). The fires were started by record-high temperatures (more than 38 C measured in Moscow) and were fed not only by forest, but also by carbon-rich extensive peat bogs in the region.

The town of Snezhinsk, also in the Chelyabinsk region, is also threatened by the wildfires. Snezhinsk hosts the All-Russian Scientific Research Center of Technical Physics – one of the two centerpoints of the Russian Nuclear program.

RIA Novosti reports Monday that fires around Snezhinsk have been localized and their area is shrinking and expected to continue doing so.