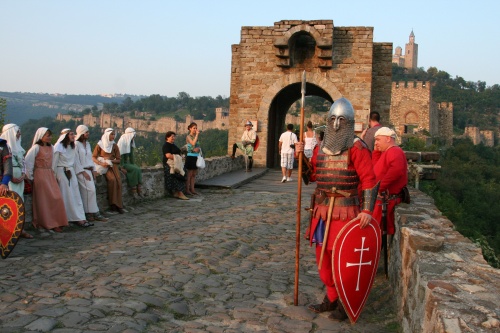 Dozens of young Bulgarians took part in the historical performances during the Stage of Ages festival in VT. Photo by BGNES

Dozens of young Bulgarians have taken part in the “Stage of the Ages” Festival in Bulgaria's medieval capital Veliko Tarnovo.

The festival, which lasted for three days ending Sunday, presented authentic costumes of ancient and medieval warriors, peasants, and priests at the Tsatevets fortress in Veliko Tarnovo, the capital of the Second Bulgarian Empire (1185-1396).

Despite the summer heat, the warriors – who are representatives of several sports and traditions club from around the country – presented their skills in wielding medieval weapons such as bows, swords, slingshots, and javelins. Their demonstrations attracted scores of Bulgarian and foreign tourists.

The most active participants in the live performances of medieval Bulgarian war styles and traditions were from the “Sila” (i.e. “Power”) Association from Plovdiv, the Varna club for historical performances “Chigot”, and the Ancient Bulgarian survival school “Baga-Tur”.