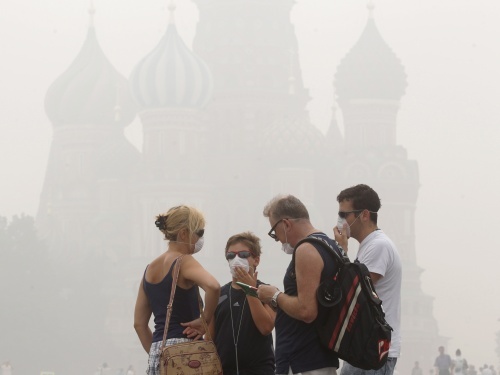 Tourists wear masks to avoid breathing the smog caused by peat and forest fires that has engulfed Moscow while in the background the Kremlin, one of Russia's most famous landmarks, is barely visible. Photo by EPA/ BGNES

Residents and visitors of Moscow are asked by Russian health officials to stay inside and avoid physical exertion as smog from the worst wildfires in modern Russian history continues chokes the city, BBC reports Saturday.

The warning particularly concerns the elderly and children.

Haze and smoke are spreading through Moscow's streets, even seeping into the subway and inside shopping malls, office and residential buildings. Masks have been long sold-out and some people are wearing them indoors.

The Russian news agency Interfax quoted an anonymous "informed" source as saying Moscow's mortality rate for July had risen by 29.7% directly as a result of the "catastrophic heat and smog".

The national death toll attributed directly to wildfires is 52. Up to 2,000 homes have been destroyed.

Nearly 560 fires were still burning across central Russia as of Friday with 322 new ones over the last 24 hours. Most of the latter have been extinguished.

Of the ones still burning, 39 are peat bog fires, 27 of them in the Moscow region alone, accounting for the smoke smothering the capital.

Daytime temperatures in Moscow remain close to 40C and the forecast remains unchanged for the next few days.

The smog also created havoc in air traffic at two of Moscow's international airports. The Sofia airport informs, however, the flights to and from Moscow have departed and landed on time.

People are, however, asked to cancel and postpone travel plans to Russia if at all possible.