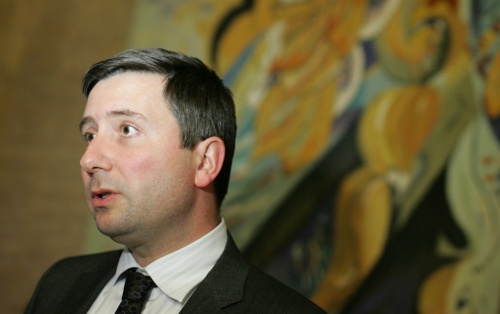 Businessman Ivo Prokopiev is the majority shareholder of Economedia. Photo by BGNES

One of the large press groups in Bulgaria, Economedia Jsc, has made public management and shareholder changes.

The company, which publishes the popular daily newspaper Dnevnik and the weekly Capital, has decided to set up an “editorial council” which will supervise the editorial policies of its media.

According to the announcement, the task of the new council will be guarantee the “high professional and ethical standards of the publications and their independence.”

The editorial council will have the power to appoint the editors of Dnevnik and Capital. It will be made up of member quotas. The quota of the independent representatives (i.e. representatives of NGOs and the civil society) will consist of three members, while the company management and the journalistic team of Economedia will have two members each.

“The creation of the editorial council is a substantial change with respect to the editorial policies of Economedia. I believe that it will guarantee the independence and professionalism of these publications and their direct connection with the civil society,” said Ivo Prokopiev, the majority shareholder of Economedia.

Elitsa Angelova has been appointed as the new CEO of Economedia Jsc. The minority shareholder Filip Harmandzhiev, who also runs a wine business, has transferred his 49% share to Teodor Zahov, an Internet entrepreneur and chair of the Bulgarian Association for IT (BAIT).