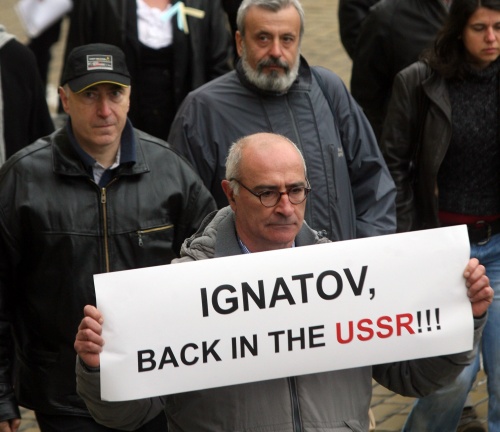 Protesters from the Bulgarian Academy of Sciences marched in May against reforms in the Academy proposed by education and science minister Sergei Ignatov. Photo by BGNES.

The Bulgarian Academy of Sciences came out Friday with a sharp declaration stating that it will go out on new protests against the cutting of state funding and the general disregard for science.

The Academy statement says that the subsidy recently voted by Parliament “will deal a new, stronger, destructive blow to Bulgarian science” and accuses the cabinet of leading a policy of “genocide” against “the potential and activities of the Academy's institutes.”

The statement describes the budget alloted to Bulgaria's largest scientific institution as “shameful” and warns that “severe damage” on science in Bulgaria is to be expected.

The Academy also promised fresh protests. In May scientists protested against proposed structural reforms in the Academy, including mergers of institutes and subordination to the Ministry of Education. As a result, PM Boyko Borisov repealed reform proposals.