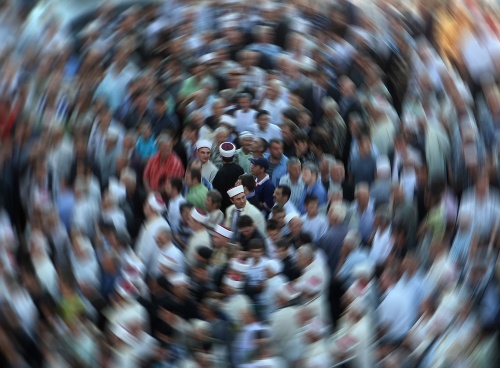 Scores of Muslims gathered at a protest rally in Sofia Thursday to voice their discontent from the Supreme Court's rule to reinstate Nedim Gendzhev as Bulgaria's Chief Mufti. Photo by BGNES

Outraged imams submitted Thursday with the Parliament a declaration signed by 200 000 Bulgarian Muslims demanding annulment of the reinstatement of Nedim Gendzhev as Chief Mufti.

This is the latest in a series of protests all around the country against the May 12 ruling of the Supreme Court of Cassations which brought back Gendzhev as Chief Mufti.

The Thursday rally was joined by the Member of the European Parliament of the ethnic Turkish party Movement for Rights and Freedoms (DPS), Metin Kazak, who pointed out Gendzhev had been Chief Mufti since the time of Communist Dictator, Todor Zhivkov, and an agent of the Communist State Security. He stated the Court's rule is a nondemocratic interference in the internal affairs of a legal religion.

The Bulgarian imams further demanded the resignation of the Minister without Portfolio for the Bulgarians Abroad, Bozhidar Dimitrov, over his media appearances and statements in which he failed to honor the will of the Bulgarian Muslims.

The muftis point out they are outraged by the disregard for their religious rights on the part of State institutions in Bulgaria.