Extinct Plant Species to Come Back to Bulgaria 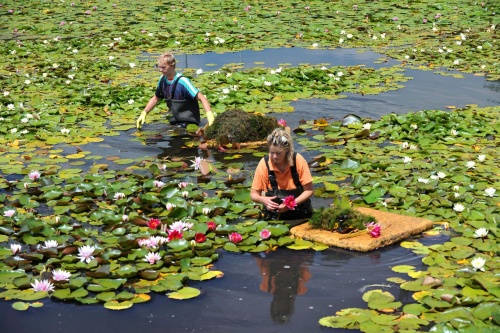 The white and yellow water lilies, as well as other extinct or rare plant species, will be restored in 10 Bulgarian Nature Parks. Photo by BGNES

Extinct and rare plant species will be brought back to four protected areas in Bulgaria, under the framework of a new environmental project of the EK Life+ program.

The project is implemented by the Bulgarian Forest Agency and the international ecological conservation organization WWF.

She noted that a while ago the two lilies could be seen in the Persina Nature Park, but they have gone extinct in the country.

Rakovska also added that strongly reduced population of plants, such as the Rila primrose, will also be restored.

In the four areas of the project, besides the two lilies, 11 more characteristic plant species, like the Water Chestnut and Marsilea, will also be brought back to Bulgaria. The habitats, included in the project, cover 21 000 ha in 10 Bulgarian Nature Parks.

“First we will make a research which places and techniques are the most appropriate for the restoration,” said Pencho Dermendzhiev, deputy executive director of the Forest Agency.

He has also stated that a tourist infrastructure will also be built under the project's framework. Cleaning of parks will also be organized and the car access will be restrained.

“This pilot project should demonstrate and popularize the good practices for conservation and restoration in the other protected areas as well,” said Veselina Kavrakova, program manager of WWF.

She has added that the program Life+ is still not used very much in Bulgaria and the country cannot absorb the annual quota provided by it.