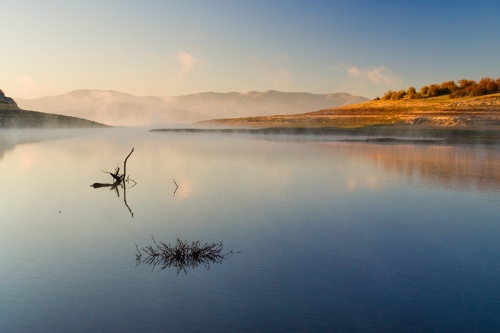 Zhrebchevo dam on the Tundzha river in south-eastern Bulgaria. Photo by Evgeni Dinev.

The Bulgarian Executive Agency on Fisheries and Aquaculture announced that two persons are entering prison Thursday for illegal fishing, following a sentence by Sliven Regional Court.

The Agency on Fisheries and Aquaculture is the authority in charge of administering activities within the EU Common Fisheries Policy and other fishery-related duties of the Bulgarian state.

The two men were casting nets on March 10 in Zhrebchevo, Bulgaria's thrid-biggest dam, located on the Tundzha river in the south-eastern part of the country, and were detained the following day.

They had made a sizable illegal 126 kg catch from a number of fish species living in the dam. The couple made use of seven nets of a total length of 400 m.

The two will be disallowed to practice any fishing for 3 years.