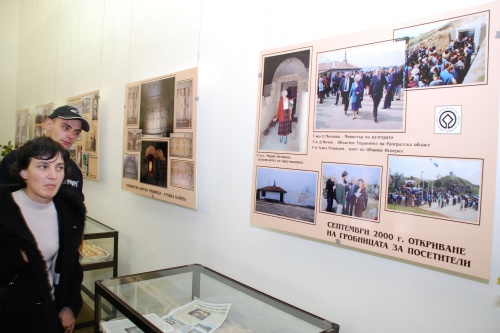 The exhibit in the town of Isperih, dedicated to the famous Thracian “Sveshtari Tomb.” Photo by BGNES

Japanese filmmakers from the Japanese National TV, NHK, are in Bulgaria making a documentary about the Thracian cultural heritage on Bulgarian lands.

The director, Reo Yamada, and cameraman, Issamu Ossada, are preparing a 60-minute film about the lost civilization and the archeology finds in Bulgaria. They are currently in the archeology reserve “Sboryanovo,” near the northeastern town of Isperih where they are reporting on the famous Sveshtari Tomb and the summer archeology expedition there.

The documentary will include footage from the Kazanlak Tomb, Perperikon, the exhibits of the National History and Archeology Museums in Sofia and commentaries of renowned Bulgarian expert on the subject, Prof. Nikolay Ovcharov

The goal is to present to the Japanese audience for the first time ever an in-depth look at the life and culture of the Thracian, beyond the gold treasures, the Bulgarian consultant for the documentary says.