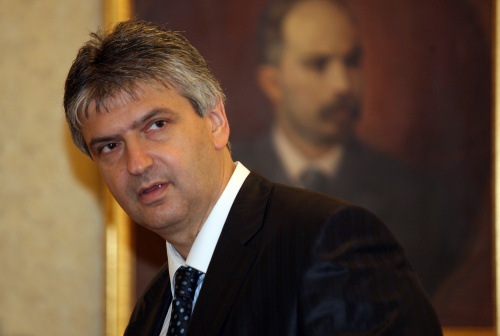 Bulgaria's Deputy Speaker of the Parliament, Lachezar Ivanov, has confirmed he attempted to prevent the report from airing but only because he was tryingtoprotect the Parliament's authority. Photo by BGNES

A reporter from the Bulgarian Nova TV has accused the Deputy Speaker of the Parliament, Lachezar Ivanov, of attempting to prevent a report, displaying the good life of some Bulgarian customs officers, due to his “friendly relations” with one of them.

Ivanov has confirmed that he has attempted to prevent the showing of the investigation. He claimed that the only reason for this was the protection of the Parliament's authority because the wife of the filmed customs officer is a lawyer from Ivanov's Parliamentary Health Commission.

The scandal comes two months after Bulgaria's PM Boyko Borisov sent official letters to the media, asking whether the ruling party GERB is interfering with the content they publish and air, and received massive negative answers.

On Sunday, the Bulgarian Nova TV aired a report by the journalist Diliyana Gaytandzhieva, showing the expensive properties and cars of six Bulgarian customs officers.

One of them is the Head of the Kalotina border crossing point, Sergey Brankov, who owns a “spectacular house”, according to Gaytandzhieva.

In front of the camera, Brankov has stated that his salary was BGN 600 and his jeep for BGN 100 000 is a gift from a friend.

According to Gaytandzhieva, shortly after the filming, she received a phone call from Lachezar Ivanov, who “friendly” asked her not to air the report.

“You have been filmed Sergey Brankov. There are no problems with him. He is checked,” Ivanov allegedly told the journalist.

On Monday, Ivanov, who has specialized as a gynecologist, told Nova TV that he knew Brankov for 20 years from the time when he was his patient. Then he noted that he has also specialized at pulmonology.

The ruling party GERB unofficially said that Borisov has had some remarks to Ivanov's work and it will be up to the him to decide whether to impose sanctions on Ivanov or not.

The Head of the Bulgarian Ethics Committee, Dimo Gyaurov, has not commented on the case because he is out of the country.

The Ethics Committee for Electronic Media has stated that the case should be brought to the Parliamentary Committee.