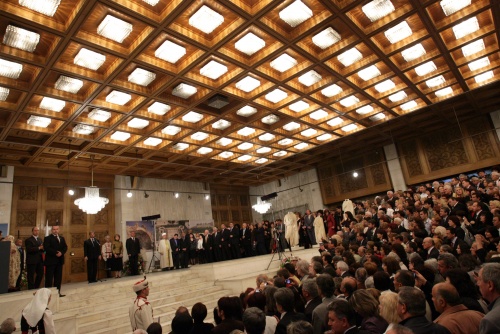 The Bulgarian National Museum of History will be one of the cultural institutions that will be renovated under the operational program "Regional Development". Photo by BGNES

The Bulgarian National Museum of History and “Bulgaria” Hall will be renovated with the financing by the operational program “Regional Development”, the director of the program has announced.

Liliana Pavlova, Deputy Minister for Regional Development, announced Monday that the program will grant more than BGN 3.3 M for renovating the National Museum of History and about BGN 1.8 M for modernizing of the concert hall “Bulgaria”.

According to Pavlova, the “Regional Development” program has approved eight projects for reconstruction of cultural institutes. In her words, the cost, which is BGN 11 M altogether, will be covered by EU funds and there will be no need for theaters and museums to provide additional financing.

She noted that the construction works should be finished in 22-month period.

Among the projects, announced by Pavlova, are the National Polytechnic Museum, which will need BGN 645 000, the Opera houses in the Bulgarian cities of Burgas and Ruse, with BGN 1.5 M and BGN 853 000 respectively, and the National School for Music and Stage Art in Burgas, with BGN 775 000.

She added that the Drama and Puppet Theater “Vasil Drumev” in the Bulgarian city of Shumen will be provided with gas and new stage equipment, costing BGN 1.3 M, while the reconstruction and renovation of the Satirical Theater “Aleko Konstantinov” in Sofia will cost BGN 739 000.

Pavlova added that apart from the renovations, the operational program “Regional Development” will begin a new plan for cultural events, which will cost BGN 6 M and in which the Ministry of Culture will have to defend projects for festivals, concert, and other cultural events.