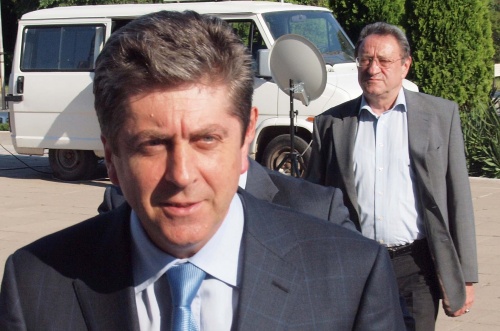 "We have a long road ahead of us, but we are obliged to try to achive these goals if we want to be on the map of the European elite," President Georgi Parvanov pointed out on Sunday. Photo by BGNES

Bulgaria needs a radical change in its economic model, according to the president, who initiated on Sunday a discussion of ways to boost employment in times of an economic crisis and the challenges ahead.

"We should admit that Bulgaria is not only a country of low taxes, which we love to boast about, but also of low-paid employees," President Georgi Parvanov said at the forum in Sofia.

Parvanov described as "a paradox" Bulgaria's mixture of high-skilled and low-paid labor market and said the problem is not a matter of quantity, but quality.

The president called for a change in the economic and growth model, which the country applies and proposed that the outsourcing model is replaced by energy-efficient and environmental friendly technologies, offering high added value.

"We have a long road ahead of us, but we are obliged to try to achive these goals if we want to be on the map of the European elite," Parvanov pointed out.

This is the third forum dedicated to the preparation of a national strategy "Bulgaria 2020" following the meetings in Plovdiv and Blagoevgrad, which discussed issues concerning the health care and education systems.

The discussion is led by Margarita Atanasova, adviser to the president in the filed of social policy.

Eco-innovation, digital developments and new skills are the drivers for future growth in Europe and the focus of the Europe 2020 Strategy. Formally adopted by the European Council on 17 June 2010, the plan for the coming decade is to get back to basics

The Europe 2020 Strategy reaffirms the goal of boosting research and development (R&D) spending in Europe from 1.9% of gross domestic product (GDP) to 3%. Another goal is to reach a 75% employment rate for men and women, and to reduce greenhouse gas emissions by 20%.