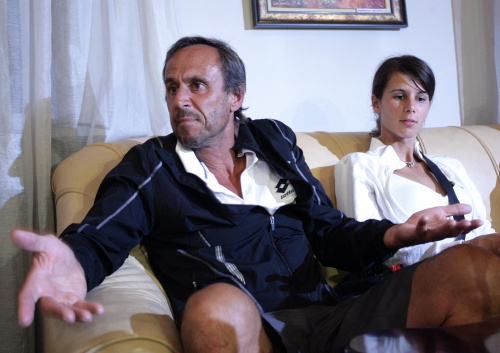 Kiril Pironkov (left), a former rower, is Tsvetana's (right) father and personal coach. The two are pictured at the Sofia Airport upon her return from the Wimbledon tournament. Photo by BGNES

The backhand of young Bulgarian tennis star, Tsvetana Pironkova, “is already perfect”, according to he father and coach, Kiril Pironkov.

In his words, his 22-year-old daughter who just because the first Bulgarian to ever reach the semi-finals of the Wimbledon tournament, is now supposed to improve some of the other elements of her play, and she will certainly win a major tournament if she manages to do that.

“I think that coaches are not decisive about the development of a player. It is the players themselves. Give me Messi and put me in Guardiola's suit, and I won't be able to do anything. It is really simple,” Pironkov said at the Sofia International Airport upon his daughter's arrival from London.

He vowed to give the rising star all the freedom she needs for her development, and for playing inspired tennis.

Pironkova made the headlines over the week after beating 2:0 sets US star Venus Williams in the quarter final of the Wimbledon ladies singles tournament. However, she subsequently lost the semi-final 1:2 sets to Vera Zvonareva of Russia.