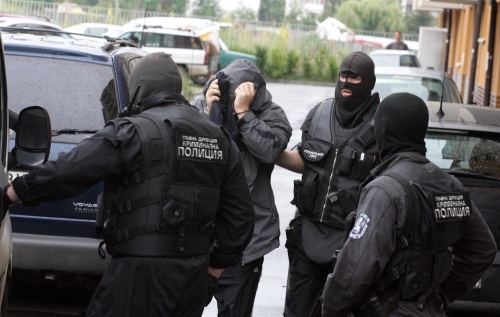 Drug dealer Lachezar Dimitrov, aka Belyata ("Trouble") is hinding his face from the cameras as he was arrested in the Lyulin Quarter Friday. Photo by BGNES

Bulgarian policemen have staged an operation detaining long wanted drug dealer Lachezar Dimitrov, believed to be the right hand of one of Bulgaria’s major drug bosses.

The 36-year-old Dimitrov, also known as “Belyata” (i.e. “Trouble”), was arrested in an apartment in the Lyulin Quarter in Sofia. He was declared wanted by the Interior Ministry in June 2009. The man tried to escape but was busted after a short chase.

Dimitrov is a member of the drug dealing group led by Hrant Varteryan, aka “Jesus”. Varteryan, who is currently wanted, was recently charged together with emblematic drug boss Hristoforos Amanatidis, aka Taki, for leading an organized crime group of 13 men specializing in drug dealing and racketeering.

Taki, considered one of the largest cocaine traffickers in Bulgarian history, is abroad. Recent media reports have indicated various spots as his location, including South Africa and some tropic islands. He is wanted with an European Arrest Warrant.

Taki is known to have inherited much of the criminal business of Georgi Iliev, the former head of the VIS group shot dead in 2005, and brother of the group’s legendary founder, Vasil Iliev, who himself was murdered in 1995,

Taki, together with his closest associate, Krasimir Kamenov, aka Karo, are believed to own indirectly a number of firms in Sofia. They are also known to have been very close with the major Bulgarian drug dealer after 2000, Metodi Metodiev, aka “Meto Ilienski” who disappeared mysteriously at the end of 2003.