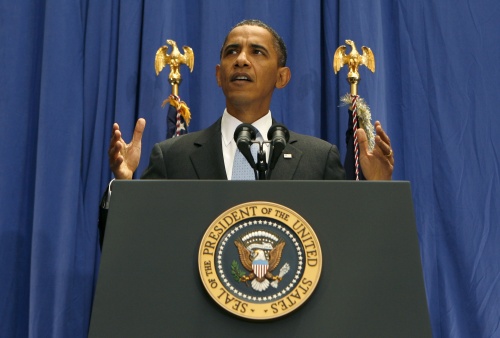 US President Barack Obama makes a speech about immigration reform at American University in Washington, USA, 01 July 2010. Photo by EPA/BGNES

There are between 15 000 and 40 000 Bulgarians residing illegally in the USA, according to estimates of Assen Assenov, a Bulgarian professor at the American University School of International Service.

In the wake of US President Barack Obama’s speech on Thursday pressing for immigration reform, Assenov, an economist researching the issues of Bulgarian immigration to the US, has commented that the passing of the bill would improve substantially the lot of the illegal Bulgarians, as cited by the Bulgarian edition of Deutsche Welle.

Of the 11-14 million illegal immigrants in the United States, some 8.5 million are estimated to be Mexicans, while the rest come from all around the world including Bulgaria.

“According to my estimates there are between 15 000 and 40 000 Bulgarians with illegal status in the US. Many of them have been here for 10-15 years. They can’t be hired to work legally, and aid for their kids is unavailable. Medical help is also limited. Thus, an immigration reform will be something very positive for these Bulgarians. This will also be great news for their relatives back home because these people will finally be able to visit them,” Assenov has said.

He has forecast that despite Obama’s pressing for the immigration reform bill, the reform will hardly come through quickly.

“We should be very cautious in our expectations. The things that Obama expresses as views on the reform in principle are a first step. There is a long period ahead of months, maybe years, of the actual implementation of these ideas and turning them into real reform,” the Bulgarian professor thinks.