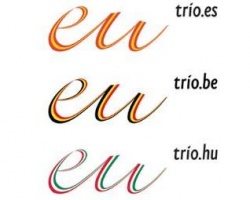 Common logo of the current EU trio presidency: Spain, Belgium, Hungary. This is the first time a EU presidency trio comes up with a common symbol to put an emphasis on joint work and continuity.

Wednesday (June 30) is the last day of Spanish rotating presidency of the European Union, after which it is Belgium's turn.

The Spanish presidency was marked by efforts to rein in economic crisis which hit hard at EU-member Greece and provoked worries about countries in central Europe, Portugal and Spain itself.

The priorities of the presidency were: (1) Consolidating Europe's social agenda; (2) Promoting a People's Europe; (3) Getting out of the economic crisis; (4) The EU's energy security and the fight against climate change; (5) Enabling Europe to speak with its own voice on the international scene and promoting its common values, peace and well-being; (6) Consolidating a safer Union for its citizens.

Real efforts understandably concentrated on the third priority, as EU leaders repeatedly got together to discuss fiscal and other measures to overcome the crisis. Nevertheless, important progress was achieved the European External Action Service – practically EU's diplomatic body that is all-important for the implementation of the EU common foreign and security policy mandated by the Treaty of Lisbon.

From July 1 the EU presidency passes over to Belgium, in which talks are currently held about the formation of a government, after elections in mid-June. EU's reins will be taken by acting Belgian PM Yves Leterme, who has submitted his resignation three times in the last three years. Especially after the results of the June elections, Belgium faces tough questions and decisions about its internal unity.

Nevertheless, Belgians are upbeat about the prospects of their EU-presidency, stating that the presidency will remain low-key, giving the opportunity for the President of the European Council to step in more. As a matter of fact, the position was created in the Lisbon Treaty in order to transfer power away from rotating presidencies. The first President of the Council is Belgian Herman Van Rompuy, who himself was PM of the country (2008-9).

The Belgian presidency's motto is "Europe in action!" Among its priorities are social cohesion, environment and climate, completion of the European Area of Freedom, Security and Justice, and framing and consolidating Europe's external action.