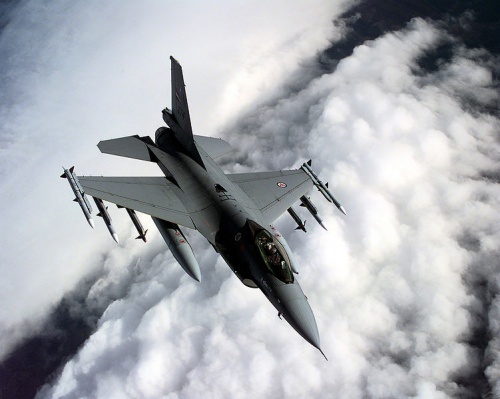 Bulgaria considers buying used F-16 jets from the US. Photo by Wikipedia

The major topic of their conversation had to do with the possibility that Bulgaria might go for buying second-hand F-16 fighter jets from the United States.

“We had talks about the preliminary research of the conditions under which Bulgaria can purchase used F-16s,” stated after the meeting Nikolay Milkov, Permanent Secretary of the Bulgarian Defense Ministry. However, no further details have been provided.

He said the commanders of the Bulgarian Air Force are supposed to draft a vision for the development of the country's military aviation by the end of 2010 in order to outline their ideas for its role as well as the potential for its development based on the resources available at the government’s disposal.

After that, in 2011, the Ministry plans to research the market, and study offers from the respective military producers. The public procurement tender and the contract can be a fact in 2012 at the earliest which means that the first deliveries of new fighter jets in can be expected in 2015.

According to Angelov, the long time period for the realization of the plan to procure new fighter jets for the Bulgarian Air Force should not cause concern since Bulgaria currently has 16 MiG 29 jets which are sufficient to guard its airspace.

The MiG 29 planes, which were modernized recently, can be used until 2030; however, the MiG 21 jets of the Bulgarian Air Force will be retired in 2012.

The Bulgarian Defense Ministry is yet to sign a contract for the post-warranty maintenance of the MiG 29, which has also been delayed for a while for lack of funds.

Publications in UK media in 2006 mentioned Boeing, Dassault Aviation of France, Gripen, Eurofighter, and Lockheed Martin as the major players trying to get the Bulgarian fighter jet procurement contract which was valued at USD 1 B at the time. Angelov has not mentioned any updated sum of a future contract.

In April 2010, Saab’s subsidiary Gripen renewed its offer to Bulgaria to select its fighter jets.

The major arguments in Bulgaria against a F-16 deal have to do with the fact that the aircraft will be second-hand. However, it is still early to predict which supplier Bulgaria will end up choosing when updating its military aviation, said sources from the Defense Ministry.

Another question discussed by Angelov and US Air Force Secretary Donley is the potential training of Bulgarian pilots in US air bases.