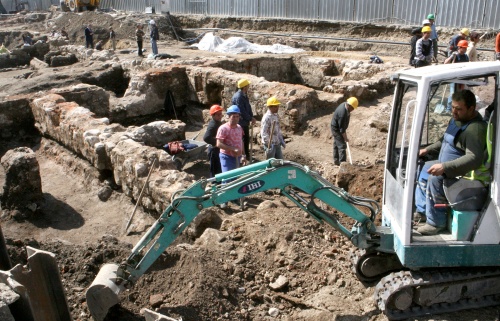 The construction of the Sofia Metro has revealed more of the archaeological heritage of the Bulgarian capital. Photo by BGNES

A large ancient building located under the St. Nedelya Cathedral in downtown Sofia might turn out to be a palace of Roman Emperor Constantine the Great, according to Bulgarian archaeologists.

The building might also turn out to be the ancient thermae, or public baths of the ancient Roman city of Serdica, today’s Sofia, according to architect Konstantin Peev, head of the EKSA company, which is helping the Sofia Municipality with the excavation and restoration of the archaeological heritage of the Bulgarian capital.

The excavations at the Sofia Largo and the so called Metro Station 2-8 next to the Tzum retail store were made necessary by the construction of the second line of the Sofia Metro.

According to Peev, the bouleuterion of the city of Serdica was located under the northwestern corner of today’s building of the Sheraton Sofia Hotel Balkan. The bouleuterion was a small amphitheater-like building which housed the council of the citizens in the Antiquity period. The Serdica bouleuterion had a diameter of about 20 meters.

Peev also said that the archeaological excavations in the spring of 2010 have so far revealed a number of Roman insula, i.e. homes closed off among four streets.

He pointed out that the archaeologists have revealed the main streets of the Roman city of Serdica – the main street, decumanus maximus, connecting the Eastern and Western Gates, was wide about 7-8 meters and paved with huge pave stones. The cardo, the secondary street, went in the north-south direction.

Architect Peev stated that the municipality and the Culture Ministry were currently considering various options for conserving and displaying the archeaological heritage of Sofia.