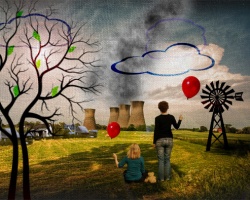 A snapshot from the Bulgarian Winning Movie "Clouds Fly West". Photo by http://cholakovv.com/en/news/

Bulgarian high school student Veselin Cholakov is the Audience Winner for 2010 in the National Film Festival for Talented Youth (NFFTY) in Seattle, USA.

The 4th edition of the festival gathered participants from 33 US states and 16 countries and around 9000 people audience in the days between April 29 and May 2.

“Clouds Fly West” is the first Bulgarian product to be shown at NFFTY. Besides getting the Audience award, the movie was also nominated for two of the other prizes.

Veselin and his movie will be presented as part of the International Student Film Festival in Cambridge, UK. After that, the movie will have its premiere in San Diego, USA.

The student from the High school of Mathematics and Science in the Bulgarian city of Bourgas has worked more than a year on the 22-minute film. It contains computer technology, hand-drawn and 3D animation, motion graphics and shot video.

The main focus of the film is urbanization, globalization, the growing population and the migration caused by local conflicts.

The audience chose the Bulgarian movie for NFFTY Earth, which promotes the power of film and youth created art to bring positive changes to the environment, support social justice, and encourage peace.

NFFTY is the largest and most influential film festival for young filmmakers (age 22 and under). NFFTY occurs each spring in Seattle, Washington and includes 100+ film screenings, filmmaking panels, concerts by youth bands, and opportunities for young filmmakers to network with industry professionals and each other.