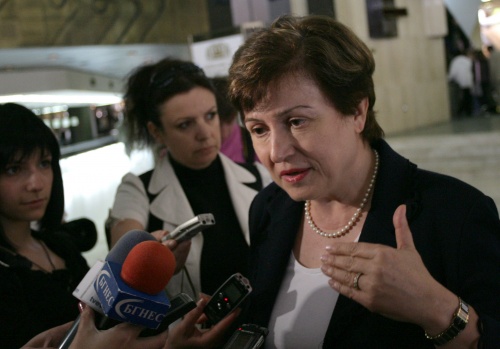 Bulgarian EU Commissioner Georgieva will go to the Gaza Strip sooner than planned. Photo by BGNES

Bulgarian EU Commissioner Kristalina Georgieva, will make a visit to the Gaza Strip sooner than scheduled after the crisis caused by an Israeli raid on 6 vessels carrying aid for the Palestinian territory.

Georgieva, who is in charge of humanitarian aid, international cooperation, and crisis response within the European Commission, confirmed Monday in the city of Veliko Tarnovo in Northern Bulgaria her intention to visit the Gaza Strip, but made it clear that the case with the Gaza-bound ships boarded by the Israeli forces will accelerate her planned trip to the Palestinian enclave.

The Bulgarian EU Commissioner revealed that two weeks ago she spoke to high-ranking representatives of the Israeli government in order to notify them of her intention to pay a formal visit to the Gaza Strip in order to become acquainted with the situation on the ground.

“This is when on behalf of the EU I asked Israel to provide a list of “prohibited goods” whose delivery to Gaza it considers dangerous because the major reasons of the Israeli government to limit the access for aid deliveries is that they may contain materials that can be used by Hamas for terrorist attacks,” Georgieva explained relating her request for Israel to Monday’s incident.

In her words, the EU is the largest donor of humanitarian aid to the Gaza Strip – about EUR 1 B in aid for Gaza is envisaged only in Georgieva’s program for the next 10-year period.

“It is of crucial importance for every EU citizen that this aid makes it to its destination because the economy in the occupied Palestinian territories is struggling and the local people can hardly rely on their own capacities for survival,” she stated.

Speaking earlier on Monday, shortly after the news about the Israeli military boarding the Gaza-bound aid vessels, Georgieva expressed a deep concern and resentment on behalf of the European Commission with respect to the raid of the humanitarian convoy.

She said the EC insisted that Israel take measures to guarantee the safety of humanitarian workers and the unhindered transportation of humanitarian aid to its destination. In her words, the EU institutions and leaders are currently discussing the Union’s options of intervening in order to help resolve the conflict, including by considering possible sanctions on Israel.

Georgieva explained that even as she was visiting mountainous areas in Northern Bulgaria such as the town of Elena and the city of Veliko Tarnovo, she was in constant touch with the EU High Representative for foreign policy, Catherine Ashton.