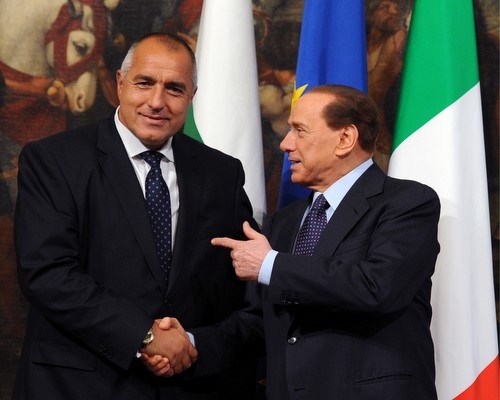 Bulgarian Prime Minister Boyko Borisov met with Italy's PM Berlusconi on Friday, announcing that Enel has been invited to consider investing in the Belene NPP. Photo by BGNES

Italy’s largest energy utility Enel has denied the announcements that it has shown interest in investing in Bulgaria’s second nuclear power plant Belene.

During his visit to Rome on Friday, Bulgarian Prime Minister Boyko Borisov said his government has invited Enel representatives to visit Bulgaria and consider investing in the Belene project, which is temporarily put on hold over the lack of a strategic foreign investor. This was followed by reports that the Italian utility is likely to invest in the second Bulgarian nuclear power plant.

In a media statement Enel confirms information it has previously shown interest in the Belene project but “is no longer interested.”

The company points out that it has started a plan to withdraw from Bulgaria by selling its 73% stake in the Enel Maritza East 3 thermal plant, a Bulgarian coal-fired plant with a capacity of 908 megawatts.

Enel says it plans to build four nuclear power stations in Italy together with France's EDF as part of Italy's efforts to revive nuclear energy which was abandoned in 1987 after the Chernobyl disaster in Ukraine.

Bulgarian Prime Minister Boyko Borisov spoke about the possibility of attracting Enel as a strategic foreign investor in Belene after his meeting with his Italian counterpart Silvio Berlusconi on Friday.

In his words, energy experts from Enel, a partly government Italian company, were invited to visit Bulgaria in order to get acquainted with the condition of the Belene project on the ground and only then Enel would decide if it would like to invest in the future plant.

The construction of the second Bulgarian nuclear plant at Belene has stalled after the previously selected strategic investor, Germany’s RWE, which was supposed to provide EUR 2 B for the project, gave it up in the fall of 2009.

The Bulgarian government of PM Borisov has not accepted a Russian offer for a state loan of EUR 2 B in order to keep the construction running until a new strategic private investor has been found.

Borisov has made it clear that his team will seek a new foreign investor from among the large European energy companies.