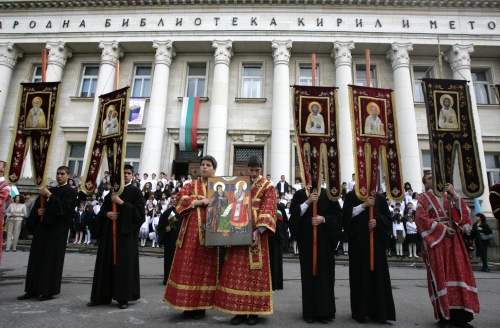 Bulgarians from around the country and the world are paying tribute Monday, May 24, to the deed of Saint Cyril and Saint Methodius, the creators of the Cyrillic alphabet.

The first celebration in commemoration of Sts Cyril and Methodius occurred 156 years ago in a Plovdiv school, currently after the name of the Saints.

The brothers were born in Thessalonica, in 827 and 826 respectively. Both were outstanding scholars, theologians, and linguists.

In the 9th century the Holy Brothers Sts. Cyril and Methodius created the Slavic alphabet and made the first translations in it. Their disciples introduced the alphabet in Bulgaria, putting the beginning of its journey to the world. Several centuries later, Patriarch Evtimii launched a literary reform and updated the alphabet, assuming that words are expression of the divine essence of things.

You can READ HERE the hymn of St. Cyril and St. Methodius