Bulgarian MEPs Urge EU to Be Proactive in South Caucasus 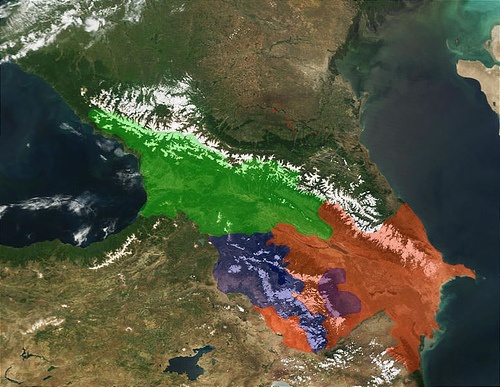 Bulgarian MEPs have urged the EU to adopt a strategy for the South Caucasus. Photo by static.flickr.com

The European Parliament has approved a report of a Bulgarian MEP urging the EU craft a strategy for the critically important South Caucasus region.

The report of the Bulgarian Socialist MEP, Evgeni Kirilov, stresses the need for the Union to be proactive with respect to the stabilization and encouraging the development of Armenia, Azerbaijan, and Georgia, the three South Caucasus states.

“The main goal of the EU in the South Caucasus should be to help Armenia, Azerbaijan, and Georgia became stable democratic states that can have good neighborly relations with one another, and be integrated with the EU policies,” Kirilov declared before the vote on his report entitled “The Need for a Strategy in the South Caucasus,” which was adopted with an overwhelming majority by the EP on Thursday.

“The South Caucasus is not only a region bordering the EU (i.e. Bulgaria and Romania through the Black Sea), but also a region of enormous strategic importance with respect to our economic and security policies because of its increasingly crucial role as an energy, transport and communications corridor connecting the Caspian Region and Central Asia with Europe,” declared Kirilov.

He expressed his hope that the most recent initiative of the EU for the region, the Eastern Partnership, will contribute substantially the integration of the three South Caucasus states with the EU, and mentioned that the realization of the Nabucco gas transit pipeline project necessitated deeper EU presence in the region.

“Yet, these ambitious policies of the EU will be hard to realize because of the shadow cast by the unresolved conflicts in Georgia and Nagorny Karabakh. The conflict in Georgia in 2008 made the EU realize that it has to play a more active role in the region. This conclusion is even more valid for the conflict in Nagorno-Karabakh between Armenia and Azerbaijan where EU’s absence is felt very strongly,” the Bulgarian Socialist MEP underscored.

Kirilov stressed the issues of the hundreds of thousands of displaced persons in the region which burdened the development of the three states there, and were a serious humanitarian problem.

“The EU has the means and the expertise to contribute to the creation of a tolerant atmosphere in the Southern Caucasus,” he said.

The report of the Socialist MEP was supported strongly by his Bulgarian colleague from the European People’s Party, Andrey Kovachev, who is the Chair of the Bulgarian delegation within the EPP-EP group.

“I welcome wholeheartedly the report of Mr. Kirilov which stresses the need for a more active EU role in the South Caucasus, a region whose positive development is in the interest not only for the neighboring Black Sea region – for which, unfortunately, the EU does not have a clear strategy as well – but also for the entire EU,” Kovachev stated during the EP debates.

He expressed his concern over the delay of the ratification of the protocols singed last October between Turkey and Armenia, and urged the EU to use its experience from the Balkans and Georgia in order to help settle the Nagorno-Karabakh conflict.

“The Lisbon Treaty has provided the EU with a framework for becoming a truly global actor. An example in that direction would be the participation of the EU as a member in the OSCE Minsk Group, while at present only the individual member states participate in the group,” Kovachev said referring to the Minsk Group set by the Organization for Security and Cooperation in Europe set up in 1992 in order to help for the settling of the Nagorno-Karabakh problem.