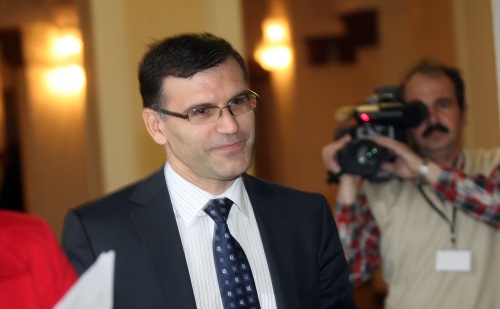 Bulgarian science has not contributed much and it has certainly done very little for the country's economy according to Bulgaria's Financial Minister Simeon Djankov.

Djankov unleashed once again harsh criticism against Bulgarian scholars during the annual conference of the International Finance Corporation which was held on May 12, 2010 in Washington DC.

In his speech Bulgaria's Financial Minister pointed out that there 8000 people working at the Academy – a great deal more than the Bulgarian tax servants.

Djankov's idea to make science applicable in daily life was met with enthusiasm by audiences at Cato Institute, one of the biggest US think tanks, headquartered in Washington DC, reports Deutsche Welle.

In his speech the Minister voiced his view that a tax hike during a financial crisis is not good for the economy as it will reduce home consumption. “This is definitely not a way out of the crisis,” declared Djankov as cited by Deutsche Welle, adding that Bulgaria needs urgent refoms in the administration, the pension fund, science and education.

Djankov's unflattering comments about the work of the Bulgarian Academy of Sciences has managed to cause quite a stir.

Back in September, 2009, the Minister made headlines in the local media by calling BAS scholars “imbeciles” for wanting to abolish the flat tax in Bulgaria.

Later on, in November, Djankov declared in a media statement that the Academy is not dedicated to scientific discovery but is infested with feudal grandpas that “only sit around and wait for their salaries to be paid to them.”

Earlier this week, the Minister revealed that BAS scholars have voted on a pension which amounts to BGN 2600.

The Bulgarian government has already announced its plans to restructure BAS by cutting down the number of institutes from 69 to 40, making them independent and depriving the Academy of its authoritative powers, has provoked an outcry in the academia circles.

BAS's real estate property is also to be made state public ownership.

The Academy was outraged at the reforms and released a declaration (May 10, 2010), stating that

“in a European Bulgaria this authoritative crush-down cannot be carried out the way it was performed in the Republic of Georgia. Similar encroachment upon the autonomy and the traditions of academic sciences in Bulgaria has never happened in the 140-year history of the Academy– not even during two national catastrophes, the change in political regimes or coups. Bulgaria will benefit nothing from the reforms and will suffer great damages.”

However, reforms are likely to be enforced as they're part of the governments austerity package according to Bulgaria's Education Minister Sergey Ignatov.