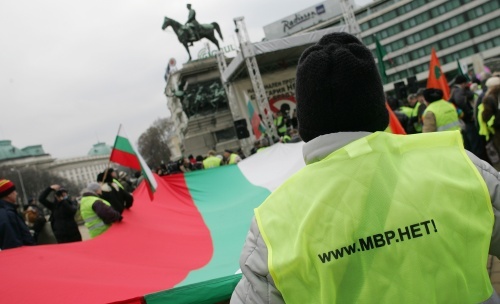 A series of massive protests around the Parliament building in Sofia took place in January this year under the slogan "Bulgaria is not Big Brother, 2010 is not 1984”. Photo by BGNES

A controversial amendment to Bulgaria’s new Electronic Communications act, which parliament adopted in February, comes into force on Monday to permit investigators to ask for the so-called traffic data when serious or computer crimes are involved.

At the beginning of the year, amidst massive protest rallies, the Interior agreed to put off the so-called interface project that would allow the police access to electronic communications under the condition that mobile and internet operators provide the requested data in 2 hours or less.

According to the final amendments, mobile operators are asked to provide the data as soon as possible and not later than 72 hours. The requirement is imposed by the frequent occurring of moth-long delays by the providers despite the court warrants.

The new Act also provides for the Interior Minister, or an individual designated by him, to determine a deadline different that the one in the text depending on the urgency or the volume of the requested information.

The Act further includes rules for deleting data – it would be kept by the operators for twelve months after the request. The authorities also have 6 months to destroy the information if it is no longer used in the probe. The data will be wiped off by a three-member Committee.

The Parliamentary Committee for Electronic Communications will monitor and control the procedures for granting and using traffic data and will protect citizens’ rights.

In addition, the Commission for Protection of Private Data will have to present to the Parliament and the European Commission annual reports about the cases where operators have provided the Interior with traffic data.