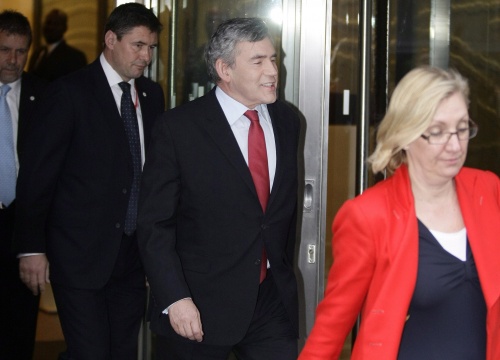 The leader of the Labour Party and British Prime Minister Gordon Brown (C) leaves the Labour headquarters in central London, Britain, 07 May 2010. Photo by EPA/BGNES

With two thirds of the seats counted in the UK general elections, the opposition Conservative Party emerges as the largest party in the new Parliament but seems very likely to fall short of a majority.

David Cameron’s conservatives need 326 seats for an outright majority in the House of Commons. However, with 597 of the 650 general election results declared, they have 286 seats. The Labor Party of incumbent PM Gordon Brown has won 235 seats so far, and the Liberal Democratic Party – 50 seats.

Forecasts indicate that both the Tories and a coalition between Labor and the Liberal Democrats are likely to fall short of mustering enough seats for a majority.

David Cameron, leader of the Conservative Party, has construed the election results as a clear sign that the Labor Party has lost its government mandate.