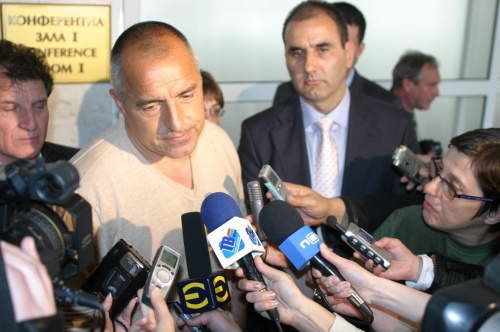 Bulgaria's PM Boyko Borisov warns he will appoint temporary supervision of the new Trakiya Highway strip if the submitted appeal against the selected supervisor slows the project down. Photo by BGNES

Bulgaria's prime minister said he will appoint temporary supervision of the new Trakiya Highway strip if the project continues to lag behind.

According to the center-right government, the construction of a section of the Trakiya Highway, which will be given the go-ahead on Monday, will lag behind schedule due to the "behind-the-curtain games" of the opposition Socialists.

Mladen Chervenyakov, a lawyer, former minister and current member of the Bulgarian Socialist Party, is said to have deliberately undermined the project by submitting an appeal against the selected supervisor of the project.

Prime Minister Borisov declared that if the “boycott continues” he will take charge and appoint temporary supervision of the project.

Borisov supported the statement made by Bulgaria's Regional Development Minister Rosen Plevneliev that the socialist member and lawyer Mladen Chervenyakov has submitted the appeal on behalf of a client of his and is deliberately slowing the procedure down by refusing to pay the administrative fee of BGN 50.

In response, Chervenyakov has commented that he is only fulfilling his professional commitments and that the fee that has been paid so far amounts to BGN 1700.

According to Minister Plevneliev, the newly launched appeal will postpone the start of the Stara Zagora-Nova Zagora strip construction by 10 days.

“Let me remind you that a number of the previous Bulgarian government declared that the highway to be almost completed, yet they did such a poor job that it came down to us to launch the construction of the new stripp,” said Monday Borisov during thegroundbreakingg ceremony.

Borisov noted that the construction of the new Trakiya section “is not merely an anti-crisis measure. We create new jobs, we contract new companies and hire new equipment that is VAT charged. Moreover, we save human lives. Ever since 1964, tens of people are killed or badly injured in road accidents,” Borisov said.

Bulgaria's prime minister cited that the price of 1km highway strip in Germany or the Czech Republic amounts to EUR 19 M, in Austria and Greece the cost is EUR 10M, in Hungary the price is EUR 11M.

Unified Highway Trace, the company that won the tender for the bid, has offered a price of EUR 2.2 M.

Bulgaria’s tie-in "Unified Highway Trace" won the tender for the construction of the new 32-kilometer-long section of the Trakiya Highway at the end of February and a month later signed a contract with the Bulgarian Road Infrastructure Agency.

The Bulgarian consortium submitted the lowest bid - BGN 137,86 M – in competition with three other approved applicants. 4 000 jobs will be created by the project in the Stara Zagora region.