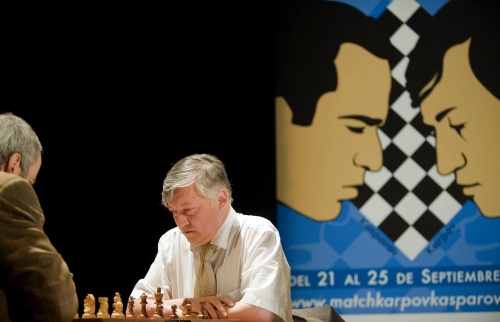 Russian chess player, Anatoly Karpov (R), four times world champion of the International Federation of Chess is in Sofia for the 7th game between Bulgaria's Veselin Topalov and Viswanathan Anand of India. Photo by BGNES

The Russian Chess Champion, Anatoly Karpov arrived in Sofia Sunday for the next game of the World Chess Title Match between Bulgaria's Veselin Topalov and Viswanathan Anand of India.

Karpov will make the first symbolic move on Monday during the seventh game between the two contestants.

Karpov confirmed before Bulgarian reporters his plans to run for President of the World Chess Federation (FIDE) against its current head, Kirsan Ilyumzhinov.

“I believe Bulgaria will back me, because chess needs changes. This is what Topalov’s manager, Silvio Danailov, who is running to become President of the European Chess Union, also wants,” Karpov told the Bulgarina National Radio, BNR.

Also on Monday, the Russian champion is scheduled to meet Bulgaria’s President, Georgi Parvanov and give a press conference with Topalov and Danailov.

The sixth game between Topalov and Anand ended with a draw and Anand now has a 1 point lead (3.5:2.5).