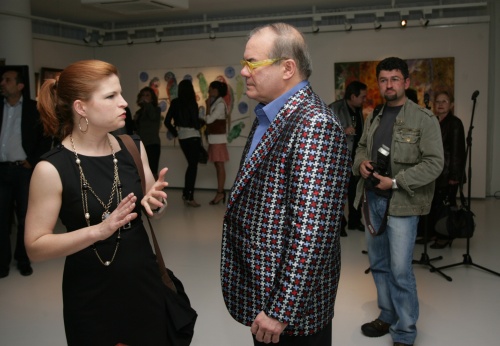 Slonem’s visit to Sofia has been anticipated by Bulgarian art-lovers for quite a while and has been in the works for several years now. It was finally realized on April 28 and 29 through the collaboration of the American Foundation for Bulgaria, and personally one of its founders and Executive Director, Teodor Vasilev, who accompanied Slonem to Sofia, the Bulgarian Ministry of Culture, and the newly inaugurated (December, 2009) Sofia Museum Gallery of Modern Art.

Slonem’s art is on display at the Gallery of Modern Art while a parallel exhibit opened Thursday evening at the National Gallery of Foreign Art, in the presence of officials from the US Embassy, Teodor Vassilev and the Program Director and Manager of the Bulgarian branch of the Foundation, Alexey Hristov.

While in Sofia, Slonem also met with teenagers from local schools to talk to them about his art, especially the famous paintings of birds and rabbits, the signature mark of the artist.

On of the most eccentric masters of today, Hunt Slonem was born June 18, 1951 in Kittery Maine. The artist combines abstract expressionism and representational imagery and is best known for his paintings of tropical birds, based on a personal aviary in which he keeps about 100 live birds of various species. His fascination with the exotic can be traced to his experiences as a child in Hawaii and as a foreign exchange student in Managua, Nicaragua. Slonem received his Bachelor of Arts degree from Tulane University of Louisiana and studied painting at Skowhegan School of Painting and Sculpture. Since 1977, Slonem has had over 150 solo exhibitions. Over 75 museums internationally display his work in their collections including the Metropolitan Museum of Art and the Guggenheim Museum, both in New York.

Today Slonem lives in New York in a 89-room residence, occupying an entire floor of a building in the city and frequently travels to Louisiana. He has several mansions where Hollywood movies has been filmed. Slonem is often called the painter of Hollywood because he is known to be a favorite of many stars such as Sharon Stone, Brook Shields, Julianne Moore, Whoopi Goldberg, Kate Hudson, Jennifer Lopez, among others.

The American Foundation for Bulgaria is a nonprofit, nongovernmental organization for community assistance, registered in the state of Massachusetts, USA. The foundation functions in Bulgaria since 2004 with the mission to support, encourage and promote excellence in Education, Natural Sciences, Arts, Culture, and the Humanities.

Both founders of the foundation PhD Diko Mihov - President, and PhD Teodor Vasilev- Executive Director are Bulgarians living and working in the USA.

Vasilev is a graduate of the University for National and World Economics in Sofia with a Bachelor’s Degree in International Relations. He received a master’s degree from Boston College and a PhD from Harvard. He is a lecturer at Columbia College, New York and continues his professional development as a consultant with auction houses and as a Director of Development of the “Elizabeth” Arts Foundation in New York.