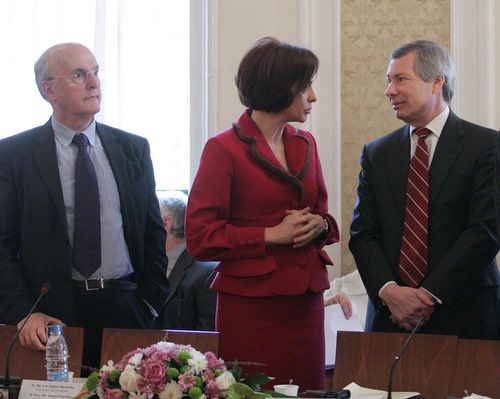 Bulgaria does not want Russian funding for the Belene nuclear plant but seeks to secure the participation of EU investors, the country’s deputy energy minister said.

Maya Hristova, Deputy Minister of Economy, Energy, and Tourism, spoke at a round table in Sofia entitled “The Belene NPP Project and European Energy Security: Bulgarian Dilemmas”, dedicated to the future of the project for the construction of the second Bulgarian nuclear power plant, which was also attended by a number politicians, senior officials, and foreign ambassadors.

“We are not involved in any negotiations to grant a share of the Belene nuclear power plant to the Russian state. After the German company RWE withdrew from the project in the fall of 2009, the Bulgarian state remained the only shareholder of Belene,” Hristova declared.

Her words came in response to a statement by Russian energy expert and representative of the Russian Embassy, Vladimir Kazanchev.

“Russia has offered Bulgaria a loan of EUR 2 B for the Belene NPP till a new strategic investor is selected – a process that will take about 1.5 years. The Russian state is ready to transfer any share of Belene it may acquire to the future strategic investor. This does not make Belene a Russian project,” Kazanchev declared which led to the reaction of the Bulgarian Deputy Energy Minister denying any willingness to accept the Russian proposal.

The argument went further as the Russian expert said that according to estimates of the Russian government, the Belene NPP project will cost a total of EUR 6.5 B. The Bulgarian Deputy Minister slammed this estimate saying the plant will cost much more but failed to specify how much exactly.

“If there is energy in the East, in Europe there is something else which is very important for both Bulgaria and Russia. Every small country has to conduct such policies so that it can get the best from both the East and the West,” the Russian expert explained reminding the words of Russian PM Vladimir Putin that Bulgaria can pick its way.

“Bulgaria should not make the mistake of throwing the baby out with the bath water. Our relations should be preserved and developed further. Bulgaria should not miss this chance to develop its nuclear energy. As a foreign diplomat, I support the slogan raised by the ruling party GERB during their election campaign last year – “Bulgaria above all”,” said the Russian representative

“There are no talks for a Russian share at Belene. We are not selecting an independent consultant which will craft a clear legal and economic framework for the project. At the beginning of the term of the Borisov government, it was not clear what the financial parameters of the Belene project would be,” the Deputy Energy Minister said.

“As far as the diversification of energy supplies, this is our creed, and our government is doing everything possible to diversify the supplies,” Hristova explained reminding that the Cabinet was taking steps to connect Bulgaria’s gas network to those of neighboring countries – Greece, Romania, and Serbia – and has started talks for such a connection with Turkey.

“We are considering how to restructure the energy sector after the dissolving of the Bulgarian Energy Holding so that this would not affect the international projects in which Bulgaria participates through this company,” said the Deputy Minister.

US Ambassador James Warlick, who was also present at the discussion, pointed out that the decisions the Bulgarian government was going to make in the energy sphere would affect the entire region, and that they will be crucial for future generations especially as far as the country’s finances are concerned. He urged the Bulgarian authorities to be as transparent as possible about these decisions.

Jorge Fuentes, the Ambassador of Spain which chairs the rotating EU Presidency, reminded that for the time being the EU has no common policy with respect to nuclear energy. He commented from the position of his country that Spain would be following the debate with respect to the Belene NPP.

The Stanishev government has selected the Russian company Atomstroyexport to construct the Belene NPP, with a 51% government-owned share in the future plant.

The other 49% were supposed to be sold to the German company RWE in exchange for about EUR 2 B. However, RWE pulled out of the project in fall of 2009, and the Borisov government said it could reduce the government share in the future plant down to 20% in order to attract greater private funding.

While the Stanishev government estimated the entire project to cost about EUR 4 B, and even negotiated a loan for that amount from the Russian government, the Borisov Cabinet estimates range about EUR 10 B, partly as a result of the global economic crisis.

In February 2010, Bulgarian Economy Minister Traicho Traikov made it clear Bulgaria would hold talks with the Russian State Atomic Energy Corporation “ROSATOM“ for the allocation of a loan of EUR 2 B to Bulgaria so that the construction of the Belene plant could go on till a new investor is selected.

He indicated that the Russian government could be granted a share in the future plant in exchange for the loan. The Russian side has declared a number of times its readiness to acquire a share at the second Bulgarian NPP.

The statements made by Deputy Energy Minister Hristova on Monday that Bulgaria had not accepted the Russian loan offer, and that it wanted to secure the participation of an EU investor rather than of the Russian government appear to be a notable departure from the position expressed over the recent months by Economy and Energy Minister Traikov.