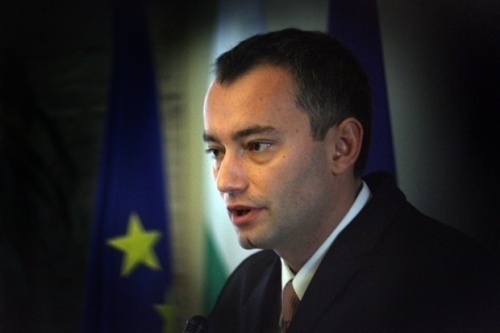 Mladenov continued; “I hope…this reminds people of the solidarity that everyone in Europe should show at these tough moments.” Photo by BGNES

Bulgaria Foreign Affairs Minister Nikolay Mladenov has sent Bulgaria’s condolences to Poland on the day that Polish President Lech Kaczynski is to be buried in Krakow.

“On behalf of the government and on behalf of the Bulgarian people I want to again confirm our condolences to our Polish friends,” Mladenov stated Sunday.

He continued; “I hope…this reminds people of the solidarity that everyone in Europe should show at these tough moments.”

Mladenov added that he was worried when it was mentioned that the tragedy in Smolensk will worsen relations between Russia and Poland. He expressed hope that efforts of the authorities of both countries to find the real cause of the tragedy will give strength to overcome the issue of the complexity and historical relations between the two countries.

Bulgarian President Parvanov and Foreign Minister Mladenov earlier canceled their attendance of Sunday’s funeral of Polish President Lech Kaczynski over the volcanic ash cloud that has shut down the air space of both Bulgaria and Poland.

Kaczynski had been heading to a memorial service for the victims of the Katyn massacre when his plane crashed – Mladenov commented that Bulgaria have their own Katyn – the People’s Court – “we ourselves killed the entire political and intellectual elite…I am disappointed that not many people attended the memorial service for this tragedy.”

The Katyn massacre, also known as the Katyn Forest massacre (Polish: zbrodnia katy?ska, 'Katy? crime'), was a mass murder of thousands of Polish prisoners of war (primarily military officers), intellectuals, policemen, and other public servants by the Soviet NKVD, based on a proposal from Lavrentiy Beria to execute all members of the Polish Officer Corps. Dated March 5, 1940, this official document was then approved (signed) by the entire Soviet Politburo including Joseph Stalin and Beria.