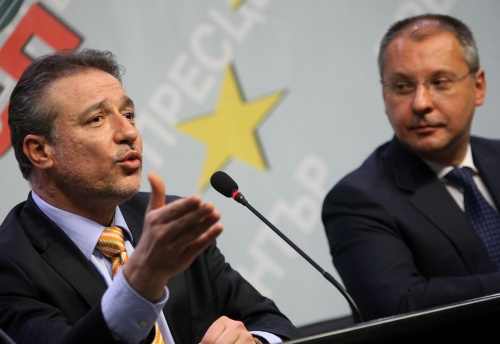 Former Prime Minister and President of Macedonia, Branko Crvenkovski, has urged Bulgaria to recognize the existence of a “Macedonian nation.”

Crvenkovski, who is the Chair of the Macedonian Social-Democratic Union, and was President of Macedonia in 2005-2009, met Thursday with the acting Bulgarian President Georgi Parvanov, and with the leader of the Bulgarian Socialist Party and ex PM, Sergey Stanishev.

“The fact that the Bulgarians are not ready to recognize the independence of the Macedonian nation, the feeling of national identity of Macedonians, is what makes Macedonians have reservations against the Bulgarians,” declared Crvenkovski after his meeting with Stanishev.

Crvenkovski denied the claims that he ever spoke against Bulgaria during his time as a major Macedonian state leader.

“I insist that nowhere in Macedonia have there been any claims that Bulgaria is not a friend of our country,” said the head of the Macedonian Social-Democratic Union.

He pointed out that Macedonia would never forget that Bulgaria was the first sovereign state to recognize its independence from Yugoslavia in 1991, or that Bulgaria recognizes Macedonia’s constitutional name (i.e. the Republic of Macedonia rather than Macedonia – in contrast to countries such as Greece who insist that Macedonia should change its name in order to avoid any references to territorial claims).

Crvenkovski explained the large number of Macedonians who are applying for Bulgarian passports with Bulgaria’s EU accession, and went as far as suggesting that if Macedonia joined the EU, there would be people from neighboring states who would apply for Macedonian citizenship the very same way.

The leader of the major Macedonian opposition party said his formation backed the signing of a “Friendship Treaty” between Bulgaria and Macedonia but stressed that the fate of the treaty is in the hands of the Macedonian government of the VMRO-DPMNE party.

It recently emerged that the Bulgarian government suggested to Macedonia such a treaty in 2008 but it has not been signed or rejected yet. The Bulgarian side is said to have designed the treaty in order to tackle the use of "hate language" against Bulgaria in Macedonian media.

Crvenkovski did slam the government of Macedonian PM Nikola Gruevski for lacking a grand strategy and for having bad economic policies in times of crisis. He also said that Gruevski has to find a way out of the name dispute with Greece in order to open the way for Macedonia’s integration in NATO and the EU.

Both Crvenkovski and Stanishev expressed their satisfaction with the relations between Bulgaria and Macedonia back in the time when their respective leftist parties were in power.