Polish President Poll Due on June 13 or 20 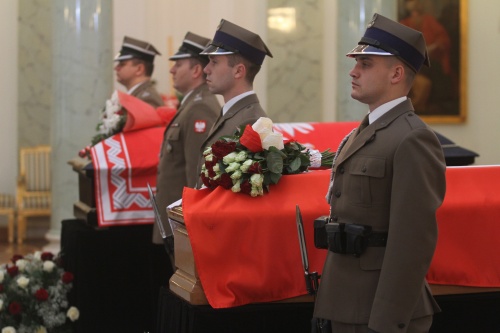 The coffins with the bodies of the late President Lech Kaczynski and his wife Maria placed in the Columned Hall of the Presidential Palace in Warsaw, Poland, 14 April 2010. Photo by EPA/BGNES

Poland's presidential election will take place on either June 13 or June 20 following the death of incumbent Lech Kaczynski in a plane crash, a parliamentary document said.

“From the beginning of this tragedy theoretically there have only been three possible dates for the speaker to call an election. Three election Sundays: June 6 -- which has already expired -- June 13 which is still possible or June 20," parliamentary chancellery chief Lech Czapla told a news conference.

Acting President Bronislaw Komorowski is expected later on Wednesday to hold consultations with political parties and to name the date of the election.

Poland's president and the first lady had been traveling with a Polish delegation to Russia for a commemorative service marking the 70th anniversary of the Russian massacre of Polish prisoners of war in the village of Katyn when the plane went down.

About 20,000 Poles, including soldiers and civilians, were executed there during World War II.