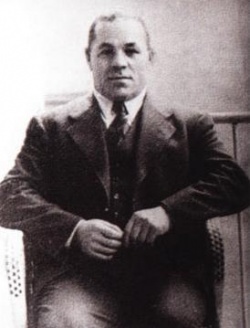 Dan Koloff was Bulgaria’s top sportsman of the 20th century and is widely regarded as the best wrestler of all time – what many don’t know however is that he owed his fame to an Ancient Greek tradition.

Koloff, born Doncho Kolev Danev in Sennik close to Sevlievo in Central Bulgaria, immigrated to the United States at the age of 17 in 1909. He found work as a railroad construction worker.

He quickly impressed with his extraordinary physical power and became famous for his ability to twist metal rails around his neck. He was subsequently hired as a wrestler in the Victoria Circus.

However, the speed of his rise to the top of the sport surprised everyone. Before being discovered and trained by Zbishko Ciganevich, Koloff was a self-taught wrestler.

Ciganevich taught Koloff the intricacies of catch wrestling - a style of folk wrestling made popular in the late 19th century by the wrestlers of traveling carnivals who incorporated submission holds, or "hooks", into their wrestling to increase their effectiveness against their opponents.

Catch wrestling's ultimate origins lie in the Ancient Greek Wrestling style which spread throughout the Roman Empire. The Ancient Greek rules of winning by submission or pin are the same as those of Catch.

Catch wrestling became immensely popular across on both sides of the Atlantic, especially in the carnivals in the United States of America during the late 19th and early 20th century. The carnival's wrestlers challenged the locals as part of the carnival's "athletic show" and the locals had their chance to win a cash reward if they could defeat the carnival's strongman by a pin or a submission.

Catch wrestling dominated in American "rough and tumble" fighting, real, no rules (without a mat) format with all striking, submissions and eye gouging allowed.

Eventually, the carnival's wrestlers began preparing for the worst kind of unarmed assault and aiming to end the wrestling match with any tough local quickly and decisively via submission. A hook was a technical submission which could end a match within seconds.

As carnival wrestlers traveled, they met with a variety of people, learning and using techniques from various folk wrestling disciplines, many of which were accessible due to a huge influx of immigrants in the United States during this era.

The Greek phrase "catch as catch can" is generally understood to translate to "catch (a hold) anywhere you can".

As this implies, the rules of catch wrestling were more open than its Greco-Roman counterpart which did not allow holds below the waist. Catch wrestlers win a match by either submission or pin, and most matches are contested as the best two of three falls.

Often, but not always, the chokehold was barred. Just as today "tapping out" signifies a concession, back in the heyday of catch wrestling rolling to one's back could also signify defeat. Many of such novel techniques arose out of cross cultural exchanges with Jiu Jitsu proponents.

The rules of catch wrestling like Ancient Greek wrestling would change from venue to venue. Matches contested with side-bets at the coal mines or logging camps favored submission wins (where there was absolutely no doubt as to who the winner was) while professionally booked matches and amateur contests favored pins (catering to the broader and more genteel paying fan-base).

Koloff’s main glory days were between 1918 and 1927 during which he was undefeated and won all 1 500 matches that he fought. He became the first wrestler to capture heavyweight wrestling's 'Diamond Belt' twice.

On his return to Bulgaria as a Heavyweight World Champion, he was welcomed by thousands as a national hero. Koloff then devoted himself to charity, arranging many more matches in Sofia and donating all the proceeds to charity. The first Bulgarian passenger airplanes were bought with Kolov's financing.

Koloff died in his home village of Sennik on March 27, 1940, of tuberculosis. His coffin was carried by officers of the Ninth Artillery Corps from the town of Sevlievo also escorted by an honorary company of cavalery. Nowadays, there is a major wrestling tournament in Bulgaria held annually in his honor.