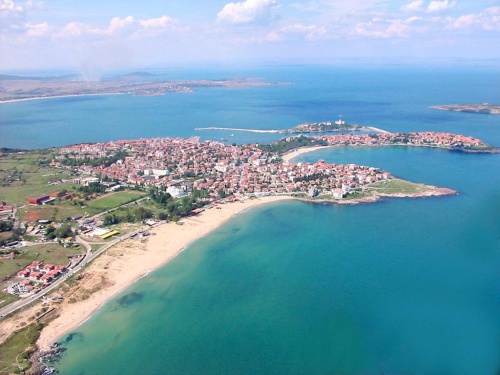 In ancient times, the Southeastern Black Sea town of Sozopol was a Greek colony, an important port, and a trade center. Today, it is a Bulgarian coastal resort with both Greek and Bulgarian tinge.

“...I’m steering my ship towards the Mesmvria bay, Anhialo. Down there, at the curve of the Pont I see Magna Apollonia.” Pomponius Mela, early Roman geographer, 43 AD.

“Avto mero ine omorfo!” (“This place is beautiful”), exclaimed the ancient Greek mariners when they sailed by the amber-coloured rock shores of present day Sozopol in the 7th century BC. Their ships remained anchored there a long time, during which the Hellenes turned the small Black sea peninsula into a city-state naming it Apollonia Pontica, after the ancient Greek god Apollo.

The Greek settlers did not come ashore a deserted land but one that was densely populated with Thracians of the Skirmiani tribe.

They were mariners, not warriors, they came with peace and lucrative offers. The Hellenes needed a place where they could throw anchor after months of crossing the seas. They wanted to found a polis, and were prepared to form an economic union with the Thracians.

Hellenic mariners offered to carry the Thracian goods (salt, metal and timber) across the perilous Bosphorus and Dardanelles straits in return for a moderately large piece of land they could call their own. The ‘deal’ was sealed in 611 BC, when Apollonia Pontica was established.

It only took the Greek settlers a short while to turn the polis into an important trading hub for wine, olive oil, fabrics, jewellery and pottery, and invest their capital in the construction of an imposing temple to honor the town’s patron god, a fortification wall, road infrastructure and an impressive number of necropolises.

But the raids of Roman invaders soon cast a shadow over the leisurely life led by the Milet Greeks. By 72 BC the Romans had finally succeeded to bring down the city’s fortification wall and conquering Apollonia.

Turbulent times were in store for the polis. In 325 AD, due to Christianization it lost its ancient name during the First Ecumenical Council of Nicaea and was given the name of Sozopolis or the City of Salvation.

Its port continued to be a safe haven and a shelter for the people from the surrounding area during various outside attacks. Later an important Byzantine port, Sozopol was first conquered by the Bulgarians in 812 AD by the powerful Bulgarian leader Khan Krum. In the following centuries the town changed hands several times between Bulgaria and Byzantium. The Ottoman Turks conquered it only in 1459, six years after the fall of Constantinople, as the town was also defended by Venice and Genoa ships.

Sozopol today is an amalgam of Greek and Bulgarian culture. The two do not clash but, rather, complement each other. If you happen to walk down the narrow cobbled streets of the ancient part of the city, you are bound to hear locals greet you with the Greek ‘yasus’, followed by the casual Bulgarian ‘zdravei’ (‘hello’). The local doctor is still ‘yatros,’ the teacher – ‘daskalos’ and the preacher – ‘papas.’

Many of the family names of the locals testify to their bearers’ Greek origins – Manuakis, Vasiliku, Petru, Laskaridis, Hadjgeorgiu, Alexiadis, Chrisopulus. The last one belongs to one of the country’s renowned marine painters – Yanis Chrisopulus (1901-1985), Sozopol’s local honorary citizen.

His father, a merchant, wanted him to pick up the trade, but he followed his instinct and became a self-taught painter. His chance encounter with Alexander Mutafov – a well-established marine painter at the time, was a moment of revelation for Chrisopulus. He discovered his talent for the brush and the paint. Sozopol became his inexhaustible inspiration, a city by the sea that never ceased to evolve.

Ana Batinyoti is a yet another ‘trademark’ figure of Sozopol that came from a family of Greek descent. She was the beauty of the town, a woman that never married but was appealing to men even at the age of 85. Famous Bulgarian intellectuals such as writer Pavel Vezhinov and poet and dissident Radoy Ralin were frequent guests in her house, which can still be spotted on the central St Cyril and St Methodius Street.

The grandson of Bai Georgi Paputo (a yet another Sozopol resident with a Greek background) remembers how his grandpa withdrew from the town’s hustle and bustle and settled in a small shack at the estuary of the Ropotamo river (approximately 70 km away to the south of Sozopol) where he fished and welcomed passers-by led astray.

One night he provided shelter for the world-famous opera singer Nikola Gyuzelev. Rumor has it that Sozopol fishermen had unknowingly welcomed in their makeshift shed His Majesty Tsar Ferdinand Saxe-Coburg of Bulgaria (r. 1887-1918)."

If you find yourself in Sozopol at the end of February and the beginning of March you will inevitably run into a merry multitude of disguised men and women – pirates, two-legged cats, fairy-tale characters.

No, the town has not gone mad, it’s just the ‘Mutzunite’ (the muzzles) Fest (a Greek-Bulgarian tradition and the Balkan equivalent of the American Halloween). The best-dressed participant is the one that is completely unrecognizable. No house is left out. The masked men and women knock on each door and put up quite a spectacle – warding off evil, heralding spring and creating a jolly good atmosphere.

Even if you miss out on the spring festival, you can feast at all times with home-made ‘Damga’ (Greek sweets with powdered sugar).The unique recipe is handed down from mother to daughter and from mother-in-law to daughter-in-law.

The ‘sweet secret of Sozopol’ as the locals endearingly call their specialty is a Greek delicacy, yet no Greek woman can prepare it as marvelously as seven Sozopol old ladies. Leader of the masterful cook ‘gang’ is Katya Kofchezlieva. She and her six followers – Zlatka, Gergana, Penka, Evtemiya, Sonya and Mariana – gather regularly to stir up the delicious treat.

“Two hands are never enough, that’s why we come to Katya’s rescue. We help with the kneading of the dough and the frying. The saying that ‘many cooks spoil the broth’ does not go for us,” explains granny Zlatka. The seven women have proudly dubbed themselves ‘guardians of the secret Damga recipe’ and quite rightfully so. Cheers!