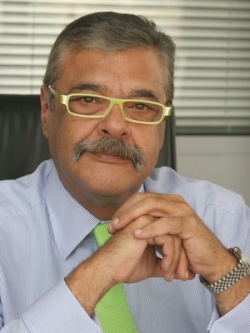 Interview with Mr. Ioannis Polykandriotis in his capacity as the Chair of the Hellenic Business Council in Bulgaria, for the Greek Survey of Novinite.com (Sofia News Agency)

Novinite.com's Interview with Mr. Polykandriotis in his capacity as the CEO of EKO Bulgaria is available HERE

Greek business has very good positions in Bulgaria. Of course, the circumstances of Bulgarian market proved to be quite friendly for such investments.

The main factors are geographic and cultural proximity, low taxes in Bulgaria and the fact that this part of the world was in a way “neglected” by big multinationals who, following the change, concentrated their efforts to the Visegrad and the former Soviet countries, thus leaving a “window of opportunity” for Greek investors.

As one of the old members of the EU, Greece has developed economic models which can be easily implemented in a new free market like the one of Bulgaria.

What would you say is the general profile of a Greek company investing and operating in Bulgaria? What is the share of the small and medium enterprises? What are the major sectors of the Bulgarian economy that have proven attractive for Greek investors?

Greek business in Bulgaria has a very large presence – from small to big companies. According to the official information, about 4 000 Greek companies are registered in Bulgaria, but approximately 300 operate here in fact. 160 of the active companies are members of Hellenic Business Council.

In 2008, the Council made a representative survey among 540 Greek and Cypriot companies and we know precisely the economic sectors that are covered… 20% of all the companies are in services, more than 30% are in real estate, in retail we have 16%. The rest are in banking, construction, manufacturing, food and beverages, and other. The share of small and medium enterprises is above 70%.

Greek companies are very active in Southeastern Europe. From their point of view as foreign investors how does Bulgaria fare in comparison to other countries in the region? What are its advantages that make Greek firms prefer it as an investment destination?

Naturally, every serious company is trying to expand the scope of its activities and to establish its presence on new markets. The proximity of Bulgaria is not the only factor… The flat corporate tax, for instance, and the tax structure in general are key factors for decision makers.

Greece is the only of the “old” EU members (the so called EU 15) with which Bulgaria has a common border. Has Bulgaria managed to benefit from bordering a EU15 state (most importantly in economic terms) as much as the Central European states have benefited from a similar position?

Bulgaria has two EU neighboring countries: Greece and Romania, and the benefits of this are obvious: free movement of goods and services, free movement of capital and of people. I would like to make an important remark here…

The immediate proximity in terms of geography should not be idealized. For exchange of know-how and capital the distance is never an obstacle. Between 1981 and 2007, Greece has been a member of the EU and in all these years we haven’t had a single EU neighbor… On the other hand, the immediate proximity is crucial when we focus on tourism, for instance…

What is the greatest issue that investors from Greece have been faced with in Bulgaria? Do you think Greek investors are as respected in Bulgaria as those from Western European countries?

In my opinion, the answer lies as mentioned already in the fact that after the big changes in 1989 the American and western companies focused on the ex-soviet countries in Central Europe – the Czech Republic, Slovakia, Hungary and Poland because of their size. The Balkans were somewhat underestimated. It was a big opportunity for Greek business and it was only natural to invest here.

How has the financial crisis in Greece affected Greek companies operating in Bulgaria? Are there suspensions of planned investments, pulling out assets, laying off workers? Are Bulgarian partners apprehensive of doing business with Greek firms, or are they supportive?

The effects of the economic downturn are felt by all companies regardless of the origin of the capital. Certain sectors are hit the worst, such as real estate companies.

The Hellenic Business Council made a special research among its members at the end of 2009 and most companies said they’d keep the same staff in 2010 as in 2009. They do not plan any major lay-offs. As for the Greek-Bulgarian cooperation, I can assure you that we see a growing number of Bulgarian companies who want to become members of the Council.

What is needed to boost the trade and tourism between the two countries even further? Do you think efforts are needed to open the border more? The last two border blockades by the protesting farmers have shown that the bilateral exchange depends on one major border crossing?

The blockades are a political form of protest… The Hellenic Business Council considers this an internal problem of Greece. It had serious repercussions and negative effects on the exchange of goods, and these negative effects hit both sides: Greece and Bulgaria. Regarding the borders…