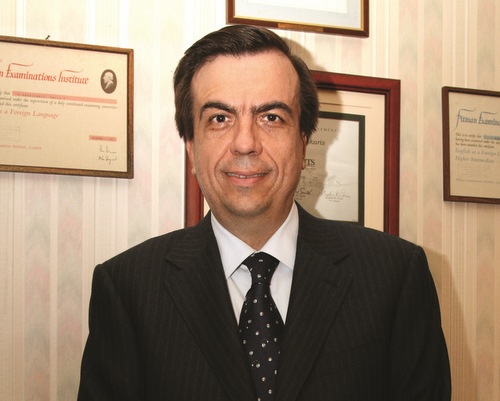 You have been in hotel management in different countries around the world. How is the Sheraton Sofia Hotel Balkan different from other hotels where you have worked? Is there anything that sets it apart from them?

First of all, thank you very much on behalf of our company, Classical Hotels and Resorts, for this opportunity to represent our hotel. It is a great honor for us.

This hotel has a special feel to it, and we all know it. It holds a great tradition and great memories in the minds of the Bulgarian people.

A number of very important events took place in this hotel in the era before 1989, and have taken place in the era after, so it is a very special hotel – not only because of its location but also because of these memories that are held very fondly in the minds of the local people.

Could you cite an example of such events?

For example, this hotel, the Sheraton Sofia Hotel Balkan, has hosted two acting US presidents with their delegations.

We have hosted numerous heads of state, kings and princesses, VIPs from all over the world, from the Hollywood scene.

We recently had Madonna when she came for her Sofia concert. Madonna herself flew out of Sofia to Tel Aviv right after the concert but her entire team stayed at our hotel. So it is a very special hotel.

What is personal philosophy or specific approach to running a five-star hotel?

I always point to a very good comparison about running of a hotel – that this is like playing tennis. I do play tennis, I have played for many years now, and I think of this kind of analogy.

It means that when you play tennis, if you look only at the scoreboard, and you don’t focus on your game, you will lose it, because your game will deteriorate over time.

On the other hand, if you focus only on your game, and you don’t follow the score, you will also lose because you won’t be focusing on the most crucial point.

So what I am trying to say here is that nowadays a hotel is managed with an eye on the results, on the financial performance of the hotel, and, on the other hand, on quality, on delivering the best you can to the guests – food, service, staff friendliness, attention to detail, all of that is quality.

This is why I think the tennis analogy holds very well.

Given the special place of the Sheraton Hotel in the life of the Bulgarian capital, and your experience around the world, how would you say that the high-profile public and social events in Sofia compare to those of other cities you have worked in?

I think that the social scene in Sofia and at our hotel has been very active. A lot of prestigious business events take place here, medical, software, financial conferences, you name it.

There is a very good mix of activities. And I feel that slowly but steadily the economy is improving, Bulgaria is getting more and more in the spotlight of the European activities because a lot of investors are coming here. I am very optimistic for the future of this country and this city.

How would you characterize the competition among the five-star hotels in Sofia?

I think that there should be a more cohesive and concerted effort amongst all hoteliers, especially among the five-star hotels in the city, so there should be more in terms of going on the market with a more coherent rate policy. I think this is lacking.

Moreover, I also think there is a lack of coordination between the hoteliers of the city and the local tourism bureaus and organizations. There is a lot of work to be done to promote Sofia as a business destination in particular but also as a leisure destination all over the world. I think this is lacking.

The Sheraton Sofia Hotel Balkan appears to be sitting right on the spot of the summer palace of Emperor Constantine the Great. With the recent plans of the Sofia authorities to excavate and display more of this cultural heritage from the ancient city of Serdika in the very downtown of Sofia right around your hotel, how do you plan to capitalize on it?

I will say it’s too early but, yes, indeed, we do have our plans but I would not disclose anything at this point until we are familiar with the full scope of the works. But we do have a game plan ready in place.

As a Greek expat manager, would you say you feel more at home in Bulgaria than you have in other locations?

Actually, I am honored to tell you that I have Bulgarian blood running in my veins because my great-great-grandfather was a Bulgarian, from Plovdiv.

In a sense, I feel as if I have come back to my roots with this assignment at the Sheraton in Sofia. Bulgaria has always occupied a special place in my heart because my grandmother used to talk to me in Bulgarian when I was young. So I have some found memories of the country, and now that I am here, I feel very happy, and very settled down, actually.

I think that Bulgarians and Greeks have a lot in common – in terms of culture, habits, society. We can do a lot of things together – because we are very close geographically speaking.

Our minds are very close, we come from the Balkans, which is a great region in Europe. So there are a lot of things in common. Including the food. You have your Shopska Salad, we call it Greek Salad, it is a variety of the Greek or the Shopska Salad.

Even now we have a lot of Greek people staying at the hotel. About 35% to 45% of our guests, depending on the season, come from Greece – business, leisure. This is very important because these Greek people bring here their money, it is a good boost for the Bulgarian economy, and because there are a lot of prominent Greek companies here.

We are very happy that we are part of it, with the N. Daskalatonakis Group, Classical Hotels and Resorts, we have raised the flag in Sofia, and we feel very confident that we will continue to improve here.