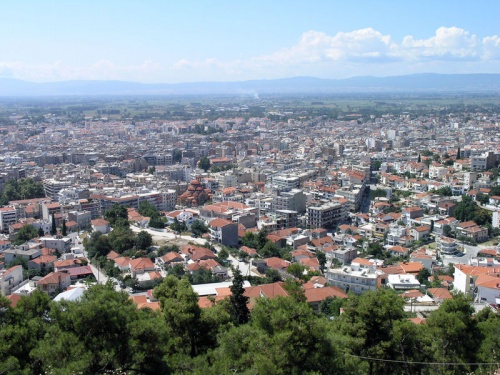 Companies from the Northern Greek city of Serres are increasingly doing business with Bulgarian firms. Photo by serres.gr

Interview with Politis Efstathios, Vice President of the Chamber of Commerce and Industry of the city of Serres, Greece.

The interview was made during an economic forum which took place in Sofia at the end of March 2010, which provided a meeting place for Greek companies from Serres and firms from all over Bulgaria in order to spur new business partnerships and connections.

What is the purpose of your economic forum?

All firms that are present at the present commercial forum are from the city of Serres. Over time, Serres has established very good commercial connections with Bulgarian companies that we would like to deepen.

It is within this cooperation that we are organizing this meeting of Greek firms from Serres with firms from all over Bulgaria so that they can discuss their present and future partnerships.

What is the scope of the economic exchange between your District, Serres, and Bulgarian companies?

At present, over 500 firms from Serres and the nearby towns work with Bulgarians firms, and over 200 have commercial offices in Bulgaria.

This also works the other way around – a lot of Bulgarian firms distribute their products in Serres.

This is possible because the two nations have common interests, common economic and financial goals, and because of that they can exchange products and have all these kinds of partnerships.

Our view is that Serres, where we come from, and Bulgaria, and especially Southern Bulgaria, are one and the same region economically, which should not be divided.

That is why, everything that we take up, we aim to make it work so that it benefits both the Greek and the Bulgarian regions.

I would like to stress that as part of this cooperation, together with the Commercial Chamber of the city of Blagoevgrad, we have drafted a joint platform, a joint action plan of Greek and Bulgarian firms, which is now in its first phase entailing the exchange of expertise and information between firm from Blagoevgrad and Serres.

The next step will be to spread this platform to all of Bulgaria, and, potentially, to all of Greece.

You have mentioned that the districts on the two sides of the Bulgarian-Greek border are one and the same economic region. What measures are necessary in order to intensify the economic cooperation and exchange between them? Is the border open enough?

Even though in the past and until recently there were many problems, the very movement of people and products across the border is free now, and there are no issues with that. Many Bulgarian firms work in the region of Serres, and the other way around, and there is a lot of traffic in both directions.

We are trying to expand our cooperation using the various EU programs. The members of the commerce chambers in Blagoevgrad and Serres, which are very close to one another, are striving to educate the local people, to teach them about the new opportunities, and to think about them more widely.

As far as the legal framework is concerned – because there are legislation differences on the two sides of the border – in order to help the firms to do business and the laborers to work more easily in the other country – we are planning to open a number of offices in order to provide information to the people.

In addition to providing information, these offices will also be providing assistance to the people over specific problems that they encounter when working or doing business in the other country.

A very pleasant piece of news and positive development is that recently Bulgaria and Greece introduced one-stop border control at the Kulata-Promahonas border crossing point. The police units have been united there so the crossing of the border is becoming easier and easier.

Is it fair to say that all the cooperation and the activities you just described are carried out mainly by small and medium-sized enterprises?

The economic situation in both Bulgaria and Greece is such that the SMEs are extremely important. Some 97% of the firms in Greece are SMEs, and, as far as I know, their share is basically the same in Bulgaria.

That is why it is no wonder that we are talking primarily about SMEs. About 99% of the members of our commerce chamber in Serres are SMEs from various sectors. We are focusing on the entire economic specter – manufacturing, services, etc.

Would you say that there are already signs of economic recovery in your region, which, as you mentioned, includes parts of both Bulgaria and Greece?

As you know, unfortunately, at the moment Greece is experiencing financial hardship. I am not optimistic, and I think that until September the situation is only going to get worse. The crisis is going to hit even harder a lot of small firms.

What is the significance of the Bulgarian tourists for the District of Serres?

Serres and its region feature a number of really beautiful and interesting spots, and the Aegean coast is also very close to us.

There is a fact that I want to point out here. The largest number of foreign visitors in Serres come from Bulgaria. I see that there are already a lot of joint efforts on both sides to boost tourist exchange. Both countries have a lot of monasteries and other tourist sites so there is something like a swap of tourists.

What we would like to achieve is to put together specific routes connected with archaeology or monasteries including sites on both sides of the border in order to prepare tourist packages for 2-3-day trips.