Fighting for the Freedom of Greece: the Bulgarian Contribution 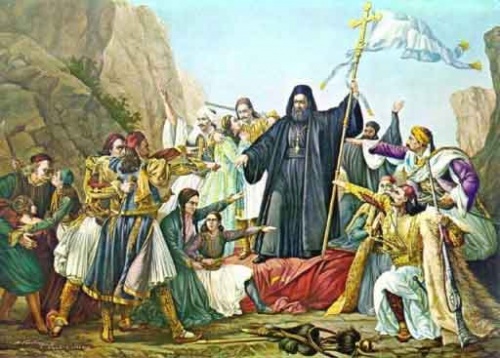 When a contemporary Bulgarian thinks about modern Greece in historical terms, they inadvertently remember first and foremost the horrific wars the two nations fought in the first half of the 20th century.

That rather sad fact is indicative of the persisting patterns of “perceiving” or “imagining” “the other” in the Balkans – even when it comes to the already (supposedly) more “Europeanized” Eastern part of the peninsula where Bulgaria, Greece, and Romania are seen as forming together somewhat of a stability belt.

The fact of the matter is that while Bulgaria and Greece were on the opposing sides in three major interstate wars in the 20th century (Second Balkan War, First World War, and, technically, the Second World War), and were adversaries in the Cold War, the rather astonishing and exciting examples of cooperation between these two nations in the modern era (19th-20th century) are constantly overlooked undeservedly.

The present situation is not unlike the relations in the medieval period of the predecessors of the modern nation-states.

Because while Bulgaria and Byzantium fight up to 200 wars against one another wars within 700 years (!!!), according to some researchers, they also cooperated massively with Bulgaria borrowing lavishly from the higher culture of the Byzantine Empire, the staggering examples for that being the Orthodox Christianity and the Bulgarian (Slavic) Script, among many others.

Driving the Arab invaders out of Europe in the often forgotten battle of Constantinople in 718 AD also counts – all the more so that it demonstrates what the Bulgarians and Greeks (together with other Balkan peoples) could have done but failed to do in the 14th century against the invading Ottomans.

In modern times, relations between the re-emerging nations of Bulgarians and Greeks were similarly tumultuous politically as well as culturally, with the Bulgarians borrowing from the traditions of modern Greek education to establish their own modern schools, and at the same time rebelling against Greek bishops and seeking to restore their independent church (which they did in 1870) in order to fight back against perceived cultural assimilation.

However, it appears that in the popular mind – of Bulgarians at least – and probably of Greeks, too, the examples of confrontation dominate the image of the other nation, while few are familiar of the significance of the “joint projects”.

For the Freedom of Greece

The Greek War of Independence from the Ottoman Turkish Empire is a staggering example of Bulgarians supporting Greeks that few in today’s Bulgaria – and, indeed, few of those from around the world who are interested in the region – are aware of.

Starting in 1821 as an armed rebellion, and turning into a great power war, the Greek War of Independence was initiated by the underground organization Filiki Eteria (“Society of Friends”) founded in 1814 to liberate Greece from the Ottomans, which immediately included a number of Bulgarian members.

According to estimates of Bulgarian and Greek historians, more Bulgarians fought for the Liberation of Greece than was the number of all other foreign volunteers combined. Some put their number at about 4 000.

In addition to the Bulgarian members of the Filiki Eteria organization, as soon as the Greek War of Independence kicked off, a number of Bulgarians from all over the Balkans flocked individually or even in armed groups to the Peloponnese Peninsula where the Greek rebellion was centered.

A total of 5 Bulgarian freedom fighters were promoted to the ranks of generals of the Greek Army during the independence war. They were usually nicknamed “the Bulgarian”.

No doubt the most famous of the Bulgarians who fought for Greece in 1821-1832 was Hajji Hristo “the Bulgarian”.

Hijji Hristo had a rather exciting fate. A native of Bulgaria’s Sliven. his father was killed in 1806 while fighting on the side of the Serbs in the rebellion against the Ottomans. The outbreak of the Greek rebellion there in 1821 prompted the Bulgarian Hajji Hristo to desert to the rebels, becoming one of their outstanding military leaders during the siege of the major town of Tripolitsa. He was welcomed to the Greek rebel army by the leaders of the Greek revolution, Theodoros Kolokotronis and Alexander Ypsilantis.

In 1822, the troops of Kolokotronis routed a 30 000-strong Ottoman army near Dervenakia, with the regiment of Bulgarian volunteers led by Hajji Hristo playing a major role in the battle.

In May, 1824, Hajji Hristo “the Bulgarian” was promoted to general. He subsequently offered the Greek leaders to organize a cavalry unit, thus becoming the creator and first commander of the cavalry of modern-day Greece.

The intensification of the war in Greece led the Ottoman sultan to request aid from his vassal, the ruler of Egypt, Mohammad Ali Pasha. The latter sent an army led by Ibrahim Pasha to Greece in 1825, which succeeded in making the rebels retreat to the mountains.

Ibrahim Pasha’s forces captured Hajji Hristo during the historic battle of Navarino Bay (October 20, 1827) in which the intervening navies of Britain, France, and Russia destroyed the combined Ottoman-Egyptian navy.

The Bulgarian military leader was so highly valued for his contribution that one of the conditions of the British, French, and Russian forces after the routing of the Ottoman naval forces was the release of Hajji Hristo.

After he was freed, the Bulgarian continued his participation in the Greek Liberation War till its end in 1832 when Greece was formally recognized as autonomous state.

A number of other Bulgarian fighters who fought for the freedom of Greece not unlike Hajji Hristo could not return to their home towns in the Ottoman-ruled Bulgarian lands so many chose to stay in liberated Greece and participated actively in the public life of the Hellenic republic.

Hajji Hristo remained in Athens. In 1843, he was elected a deputy in the Greek national assembly representing the Bulgarians living in Greece. He had 4 daughters and 2 sons and died in 1853. A monument in Athens has recognized his contribution to the fight for the Greek liberation.

In the Footsteps of Garibaldi: Kapitan Petko Voivoda

A few decades after the Greek Independence War, another Bulgarian figure stands out in the continuing fight for the liberation of all Greek lands – Petko Kiryakov, also known as Kapitan Petko Voyvoda. (“Voyvoda” means a leader of an armed unit in Bulgarian.)

Unlike Hajji Hristo, who fought for Greece, Petko Kiryakov was primarily active in the fight for the freedom of his native area which back then featured more numerous Bulgarian population.

However, Kapitan Petko Voyvoda was also an international revolutionary who fought for the freedom of both Bulgaria and Greece. Petko Kiryakov was born in 1844 in the village of Dogan Hisar, today Esimi (Aisymi) in Northeast Greece, near the town of Alexandroupolis.

After a local Turkish landlord killed Petko’s brother in 1861, he set off to the nearby mountains organizing a small detachment of rebels (“cheta”), which fought against the local Ottoman authorities defending the local population of Bulgarians, Greeks, and others from the excesses of the Ottomans. His first marriage was with a local Greek girl with whom he had a son named George.

In 1864, he was invited to Greece by the Athens revolutionary committee which was organizing a rebellion against the Ottomans on the island of Crete. He went to the Athens military school, and was then sent to the region of Macedonia in order to try and prepare a simultaneous uprising against the Ottomans. After spending time there, Petko reported back to Athens that the region was not ready to revolt, and shortly after that left for Italy to meet with the legendary revolutionary leader Giuseppe Garibaldi.

Kapitan Petko Voyvoda spent several months with Garibaldi staying at his home in Caprera, Italy, and learning from him what Petko himself described as “invaluable lessons” on revolutionary tactics.

Garibaldi supported the idea for staging a revolt in Crete and helped organize a regiment of 220 Italian volunteers. In Athens, these were joined by 67 Bulgarians. The 22-year-old Petko Voyvoda, and Garibaldi’s aide, Friedrich, were initially in charge of the international troops.

Upon arriving in Crete, the “Garibaldi Unit” was placed under the command of Greek general Panos Koroneos, whereas Petko Voyvoda was put in command of a smaller unit of Bulgarians and other foreigners. During the Crete revolt the Bulgarian freedom fighter took part in 21 battles, 5 of which were especially severe, and was given the title of “kapitan”, or “captain”.

As the Crete Revolt was suppressed, the capitulation terms required that the rebels surrender their weapons and pass with their heads bowed between two lines of Ottoman soldiers.

Considering this to be an utter humiliation, Petko Voyvoda was the only one who did not comply with the armistice terms. He fled the island with 18 other men to Alexandria, Egypt. After that he traveled to Marseille, met once again with Garibaldi and Italy, and returned to Athens.

There, he survived an Ottoman plot against his life, and left for his native area to fight for the freedom of Bulgaria. His voyage was extremely daring as he took a ship together with 40 Bulgarians dressed in Ottoman uniforms, and on his way to the Bulgarian lands, he even expected an Ottoman naval base located on Aegean island pretending to be a Turkish general.

In 1869-1878, Petko Kiryakov was active with his armed followers in the area of the Rhodoppe Mountains (today’s southern Bulgaria, northeast Greece, and European Turkey).

His troops played a crucial role in preventing atrocities against the local population by Ottoman irregulars during the Russian-Turkish War of 1877-1878, which liberated Bulgaria but the Russian troops did not reach the area where Kapitan Petko Voyvoda was active, and these lands were not included in the new Bulgarian state.

After Bulgaria’s liberation in 1878, Petko Kiryakov moved to Varna. He was active in Bulgarian politics which led to repressions against him in the 1890s over his Russophile views. He died in 1900.

There are 22 monuments of Kapitan Petko Voyvoda in Bulgaria, 1 on the Gianicolo Hill in Rome, close to the monument of Garibaldi, and 1 in Greece, in his native village, errected by a local resident in the yard of a private hotel.

The lives and example of men such as Hadzhi Hristo the Bulgarian and Kapitan Petko Voyvoda are hardly remembered in everyday life - including when it comes to the relations between the nations of Bulgaria and Greece.

Yet, it is useful to remember sometimes that they did what they did - just as a simple but magnificent reminder that peoples and nations can be united in the name of their high ideals.