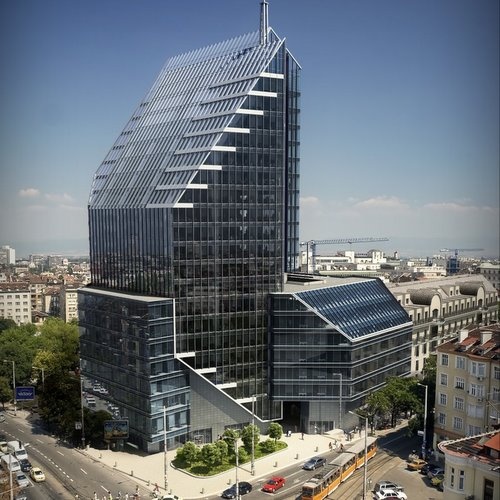 The CITY TOWER Business Center constructed by the GEK TERNA Group of Companies in the downtown of Sofia (Macedonia Square) will be completed in 2012. Photo by icon-bulgaria.com

Which are your company's most significant investments in the real estate sector in Bulgaria?

GEK TERNA Group of Companies, through its 100% owned subsidiary ICON Ltd, can present an exceptionally rich portfolio of properties in Bulgaria – in Sofia, Samokov, Lom, Svilengrand, Krivina, Batak, which are under development for residential uses in urban & rural, alpine & by the seaside areas, malls, office buildings, etc.

Additionally, we have started the construction of “City Tower”, a Class A+ business center of 55,000 sq. m. total built-up area in the heart of Sofia, at Macedonia Sq., which will be concluded in the late 2012. We are also planning the development of “GLS” - a retail park on the Ring-Road of Sofia.

Which are the difficulties that you face as an investor in Bulgaria? How do you assess the business climate in Bulgaria? What has changed during the global crisis? Do you have any recommendations for those in power now in Bulgaria?

Bulgaria has done much and achieved a considerable progress over the last few years to attract more investments.

GEK TERNA Group is present on the Bulgarian market with a full range of activities as a construction company through TERNA, as an investor in the real estate field through ICON, as a energy producer through TERNA ENERGY.

Beyond the well-known problems such as lack of transparency, corruption, etc., which of course are subject to an intensive set of efforts for solving by the government, what is needed is all European rules to be duly respected in order to change the country's image in Europe and to secure the flow of EU funds with no further obstacles.

It is also utterly important all stakeholders and businesses to work on an equal footing in their relations with government and government agencies.

We sincerely hope that all commitments of the new government will be especially kept in the field of problems minimization that are currently faced by the investors.

Of course a low tax rate on the corporate profits has been introduced, but this alone is not sufficient unless accompanied by an overall development incentives that will be applied in force and equally refer to all.

Finally, we believe that particularly with regards to property investments, a leading role in improving the situation would also play and the gradual improvement of infrastructure especially in transport - public transport.

As a group, however, we are going to gradually start realizing an investment plan of total value of EUR 500 million in real estate and energy production fields over the next 2-3 years.

It’s a well known fact that the global crisis has influenced investments and business activity in Bulgaria, as well as the real estate sector.

Nevertheless, we are positive and we believe that each project can differentiate for its high quality characteristics even in times of economical difficulty.

For that matter, we are pleased to report that our project on Bulgaria Blvd. Bulgaria, the “3TOPS” complex, has already been sold by 80%.

Likewise, in the luxurious residential complex, Gerganitza Palace, situated at Boyana region, we have already sold 40% of the residencies.

At the moment we retain a level of optimism as we have the ability to wait for the anticipated improvement of the Bulgarian economy.

The civil works on the «City Tower» project are expected to be completed in about 2.5 - 3 years.

As regards our work in Borovets the project will start to be delivered in stages by the end of 2010 regarding the residential section and will be completed by mid-2011.

Do you think that large-scale projects have future in the poorest country of the European Union – Bulgaria? Do you think that the real estate market still has untapped potential, regardless of the slump that was registered over the last year?

The fact is that over the last few years the market of commercial and office spaces there has been oversupplied.

At present it is hard to forecast if all the shopping and business centers, developed or planned to be developed, will prove as successful projects, but I consider that this would be rather difficult to be true.

To be honest, I'm not so sure whether all major projects that had been announced over the last years before the outbreak of the financial crisis, will be completed eventually.

We have as our basic rule to place our real estate investments in the best locations in central parts of the markets, which are matter of our interest, as these properties predominantly have “defensive” behavior in times of crisis.

If you distinguish our projects both in terms of residences and business centers, you will see that we invest in the most attractive locations and we highlight with a great emphasis on good architecture and quality construction.

Let me, however, note that in contrast to commercial properties, we believe that the housing sector in Bulgaria suffers a considerable lack of quality options and when the offerings by primarily developers with serious economic problems are absorbed, then good housing complexes in good areas will prove a very attractive and successful investment.

When do you expect the Bulgarian economy to fully recover?

As you would probably understand, I would be a prophet if I could answer that question in certain.

However, I think the fate of the Bulgarian economy largely depends on the speed of improvement of the international economic climate, which would bring back the foreign investors in Bulgaria.

It would be great if, upon their return to Bulgaria, the investors find all those problems I mentioned above solved and the investment environment significantly improved.