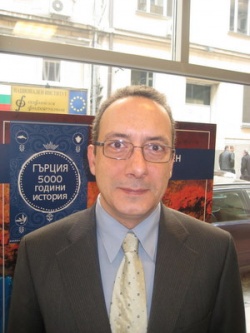 Right after Bulgaria's accession to the EU, the number of Bulgarian tourists in Greece marked a sharp rise, while Bulgaria was also the most preferred destination among Greek tourists. How have the figures changed three years later, bearing in mind the changes in the economic situation and the global economic crisis?

Even in 2009 we had more than 400,000 people from Bulgaria visiting Greece, especially for tourism reasons, regardless of whether they are accommodated in hotels and pay for the nights spent there or stay with friends.

This is quite a big number even though it is down by 8,8% compared to the previous year, which was one of the excellent years in terms of Bulgarian tourists visiting Greece.

Bulgarians are not very willing to go to faraway destinations and in comparison with the decrease in the number of Bulgarians traveling abroad in 2009, the figures for Greece are quite good, despite the bad criticism and publicity that the country has suffered.

As for the Greek tourists in Bulgaria, they are almost 350,000 and they rank as the second best clients of Bulgaria after the Germans.

They come to Bulgaria for city tours or go to the lovely mountain resorts. The country's sea resorts are not that popular among the Greek tourists since they are quite far and provide another kind of experience in comparison with what the Greeks are used to.

What is you forecast for this year?

The holidays in Greece have been preferred by many Bulgarians not least because of the good offers and ratio between quality and price, very often much better than those offered by Bulgarian resorts. How did Greece manage to evolve into a European magnet for mass-market tourism?

Greece has been working on its tourism sector for many years. Our organization itself has existed for more than 50 years.

We have based everything in the tourism sector on the culture that we have, everything started from there after the monuments were found, more often than not, by foreign archeologists. Let's not forget that Greece is the country of democracy and this is something, which is accepted everywhere in the world.

Culture and history were the beginning, then everything else came with a lot of work and a lot of advertisements. It is not an easy thing when you have so many islands!

What is Greece's strategy in targeting the Bulgarian market and how does it differ from that in Serbia and Romania?

Even though we are referring to all these countries as the Balkans, the mentality of the people in each one of them is different. Yes, we do have common habits, for example, but it is very important that each should be approached individually.

Our strategy in Bulgaria for this year does not focus so much on the advertisements, as on targeting the professionals in Bulgaria – tour operators, travel agencies, media - to give them the opportunity to know Greece better through info trips, press releases, etc.

The period is quite difficult and the amount that Greece allots for advertising is going to be about EUR 10 M, which is four time less than the previous year.

Do you expect Greek tour operators to increase their prices for packages targeting the Bulgarian market because of the price and taxed hikes in the country?

No, I don't think so. The Greek tour operators will not increase their prices, so we can safely assume that prices of packages for Greece, offered by Bulgarian tour operators, won't increase either.

What is the profile of the average Bulgarian tourist in Greece?

I have been in Bulgaria for more than two years already, and what I see in almost every program is that the northern part of Greece is the most famous destination for the Bulgarian tourists, not least because it is the closest.

The Bulgarian is like an internal tourist, like a Greek. Greeks can go out for a weekend and the Bulgarians can do the same, unlike the Romanians or the Serbians. People from the southern part of Bulgaria and the capital Sofia visit Northern Greece just for one day – for shopping or during the summer for swimming.

I would also like to point out that the more exotic places are becoming more and more popular, particularly the Ionian Sea islands, such as Corfu. For Bulgarians to get there is just as easy as it is for the Greeks, who live in the northern part of the country.

How many times has Greece changed its slogan and logo that represent it as a tourist destination?

For the last five years we have changed our logo two times, introducing slight changes. The latest logo's slogan is “Greece, the true experience.”

Just two weeks ago we changed it again, skipping the second part of the logo. “Kalimera” is the slogan for the new advertising campaign of the Ministry of Culture and Tourism, for this year’s tourist season, which will be promoted in markets world wide.

Do you use European Union funds in developing Greece as a major tourist destination?

There are European Funds in every program, including collaboration with Bulgarian partners, developing hotels, creating new ecological things, which is our focus now. It is a different way of thinking. When you act like a tourist you should also respect the environment.

How good or bad is Bulgaria in promoting its image as a tourism destination? What should be changed?

It depends on the budget. If you spend EUR 40 M, you will probably be in the media around the globe.

Is it possible for Bulgaria, Greece and Turkey to unite their forces and launch a regional tourist product?

I am very positive about it. If you are trying to persuade a travel or tour operators from several countries to get involved in such a program, they have to offer equal products – in terms of quality of service, safety, attractions, monuments.

I think it is a very good idea to promote our countries in destinations like China and Japan, because the people there are visiting continents, not countries.

Tell us which Greek cuisine and tradition do you find to be the most thrilling?

Bulgarians like very much eating meat, but I like everything that has to do with sea products. This is my favorite food and I miss it here.

Which Bulgarian symbol do you find to be the most thrilling?

This is a big topic. Regardless of whether you have a good or a bad logo, the truth is that you have to stay with it for a long time so that it can be recognized.

Bulgaria's symbol now is the rose and I like it very much because it is something typical of the country. The problem is how to persuade the public and commercial services – and this is the same problem in Greece – to use the same logo in everything they do.