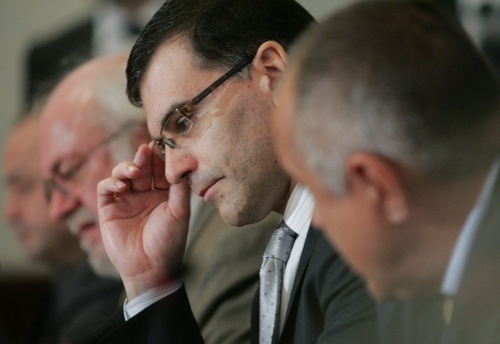 The Cabinet, trade unions, and the business sector shook hands on a 60-measure anti-crisis program

The anti-crisis program adopted by the Bulgarian government may actually exacerbate the country's financial situation, states a report of the Sofia-based Institute for Market Economy (IME).

The report comes a day after the Cabinet, trade unions, and business sector shook hands on a 60-measure package aimed at raising state revenue and cutting public spending in order to prevent a worsening of the budget deficit.

“Yet, it's unclear how the remaining BGN 1 B will be collected. Expectations are that about BGN 500 M will come from the sale of greenhouse emissions. This, however, may turn out to be wishful thinking since predicted and actual revenues may not overlap,” declares the IME.

It further states that even though privatization of state assets is expected to generate some BGN 250 M. Yet, this is going to finance the deficit but will not help reduce it, according to the IME analysts.

“The proposed measures in support of the labor market have also come to the front. But instead of making the home market more flexible, the Cabinet has focused on increasing the minimal salary, restricting foreign-country workers, enforcing collective work contracts, monitoring qualified labor and the like,” explains the report.

Even though the newly forged anti-crisis policy will not raise taxes it will lead to redundancies in the administration and unclear labor market consequences, concludes the report of IME. It also points out it is unclear whether the Cabinet's proposed 60 measures will raise the BGN 1,6 B needed to fill the emerging budget deficit.

Last Friday IME pointed to a number of domestic and international analyses showing that the administrative services in Bulgaria are low-quality, and that they present substantial obstacles for doing business and for fueling corruption, partly thanks to the low level of transparency.

The Institute has emphasized the need for a full-fledged and fully operational electronic government. It insisted on a boost of e-government in Bulgaria following the principle, “free e-government services – double-priced services at the counter” and said that the institutions which do not use electronic signatures must face severe sanctions.