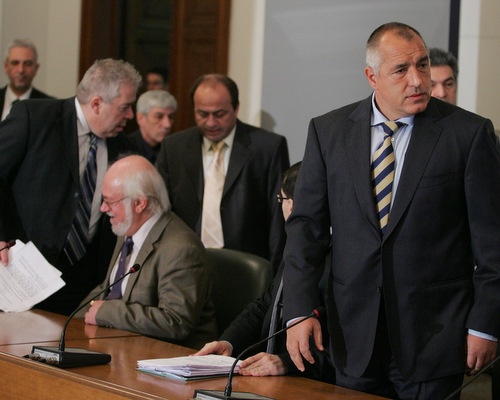 Bulgarian PM Borisov (right) next to syndicate leader Konstantin Trenchev (left sitting) during the signing of the anti-crisis measure package. Photo by BGNES

The members of the Council for Tripartite Cooperation made up of the government, six employers’ organizations, and the two major trade unions have been negotiating for more than two weeks on how best to tackle the effects of the crisis on the state budget and the national economy.

More information about the adopted measures is available HERE

“The employers and trade unionists are convinced that the measures are thought all the way through and will bring the expected results. We are optimistic that we have found a way to overcome the economic crisis more easily,” said Konstantin Trenchev, head of the Podkrepa Labor Union at the signing.

On part of the government the anti-crisis document was signed by Finance Minister Simeon Djankov in the presence of Prime Minister Boyko Borisov.

The Chair of the Bulgarian Industrial Association Bozhidar Danev has remarked that the anti-crisis talks had been very hard but also very constructive. He said a number of difficult decisions had been put off but that the approved package was spreading the burden of the crisis among the state, the employers and the workers. He even went as far as suggesting that there had never been such a constructive social dialogue in Bulgaria.

“Three days before Easter the social dialogue in Bulgaria was resurrected,” stated Ivo Prokopiev, Chair of the Confederation of Employers and Industrialists in Bulgaria. In his words, the package is going to improve the business environment, and is setting the stage for further talks on the reforms in health care and the retirement system, which will be discussed by the end of May 2010.

Nikolay Nenkov, Deputy Chair of the Confederation of Independent Bulgarian Syndicates, announced that the government had agreed to propose a 5% increase of the natural gas prices starting April 1 instead of 15% as was previously expected.

He pointed out that the Tripartite Council had agreed that the health insurance fee would not be increased by the end of 2010.

The head of the Bulgarian Chamber of Commerce and Industry, Tsvetan Simeonov, has emphasized the fact that the taxes will not be increased and that Bulgaria will therefore remain an attractive destination for foreign investors.

Bulgaria’s Prime Minister Boyko Borisov declared that one of the key adopted measures was the payment of BGN 550 M of state debt to private companies within 15 days. The payments will be made through the Bulgarian Development Bank.