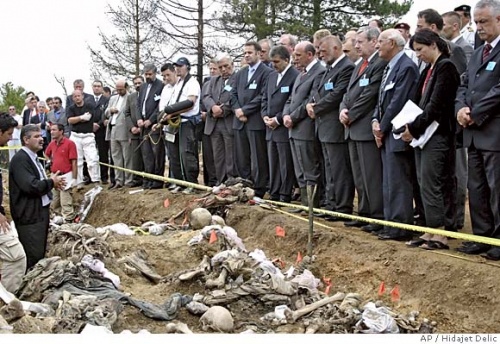 The killing of nearly 8,000 Bosniaks (Bosnian Muslims) was carried out by Bosnian Serb forces - allies of then-Serbian President Slobodan Milosevic. Photo by sfgate.com

Serbia's parliament has passed a landmark resolution offering an apology for the Srebrenica massacre in 1995 - the worst incident of the Bosnian War.

The resolution says Serbia should have done more to prevent the tragedy. It was approved by a narrow majority.

However it stopped short of calling the killings a genocide, the BBC reported.

The killing of nearly 8,000 Bosniaks (Bosnian Muslims) was carried out by Bosnian Serb forces - allies of then-Serbian President Slobodan Milosevic.

Meanwhile, a Dutch court has rejected an attempt to hold the United Nations responsible for the massacre.

The resolution was approved after almost 13 hours of heated negotiations in the Belgrade parliament. The pro-Western governing coalition managed to pass the resolution with a slim majority - 127 MPs voted in favor, out of a total of 250. Only 173 were present for the vote.

"The parliament of Serbia strongly condemns the crime committed against the Bosnian Muslim population of Srebrenica in July 1995," the text says.