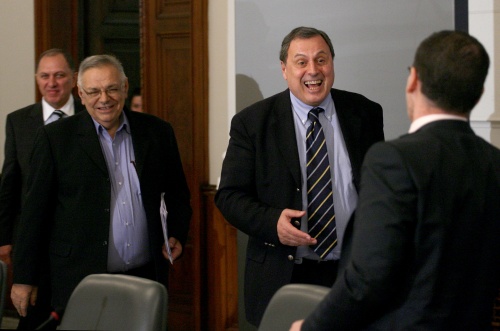 Union leader Hristov (left) and Bulgarian Industrial Association head Danev (middle) during the meeting of the Council for Tripartite Cooperation. Photo by BGNES

Bulgaria’s trade unions and major employers’ organizations have disagreed over a proposal to increase the minimum salary.

The disagreement emerged during Friday’s meetings of Bulgaria’s Council for Tripartite Cooperation, which featured representatives of the government, the two major trade unions, and the six major employers’ organization, called together to discuss the Cabinet’s anti-crisis program.

The Council failed to discuss the much anticipated topic about the increase of the value-added tax from 20% to 22% proposed by the government.

The trade unions demanded that the minimum monthly salary in Bulgaria (currently set at BGN 240) should be increased to BGN 270. This will mean a net month income of BGN 213, which is BGN 2 above the poverty line.

The major argument of the trade unions is that the minimum monthly salary should be tied to the level of the poverty line.

This led to the disagreement with the business representatives who demanded that any increase of the monthly salary should be tied to labor productivity.

According to Plamen Dimitrov, deputy head of the KNSB syndicate, as cited by Darik Radio, the government was willing to approve the idea increase the minimum salary to BGN 270, and only the business sector has to be convinced of that,

Dimitrov estimated that the increase will cost Bulgaria’s state budget additional BGN 4 M by the end of 2010. He cited data of the National Statistical Institute saying that about 180 000 Bulgarians received the minimum monthly wage.

During Friday’s anti-crisis meeting, the business sector stressed its idea for legislative changes that should lead to a “vacation period” for the firms which are owed money by the government and/or by companies which have at least 51% state participation.

During the “vacation period” in question, private companies meeting this requirement should be exempt from interest penalties on delayed tax and social insurance payments, and should be allowed to apply for EU funding and public procurement orders, insist the businessmen.

The government has promised to consider this idea in detail. According to various estimates the Bulgarian government owes about BGN 1,5 B to businesses for services they provided to the state over the recent couple of years on public procurement projects.

One of the other measures discussed on Friday includes the sale or lease of state-owned land. The idea was presented by Agriculture Minister Miroslav Naydenov.

Currently, state-owned land can be leased for a period of ten years. Naydenov said the new measure may extend that period to 30 years in exchange for a certain amount of advance payment. In his words, the state owns about 2,8 million decares of land, and his Ministry is going to come up with a detailed analyses of the benefits of the proposed measure.

Another government idea was presented by the head of the National Revenue Agency, Krasimir Stefanov, who said there was a draft bill under discussion banning cash payments of transactions exceeding BGN 5 000.

The business sector and the trade unions have approved this idea as a way of raising tax revenue.

Even though the big question of whether the VAT will be increased by 2% till the end of 2010 was not discussed on Friday, representatives of the employers have commented unofficially that there is a possibility that the government might not have to resort to that measure.