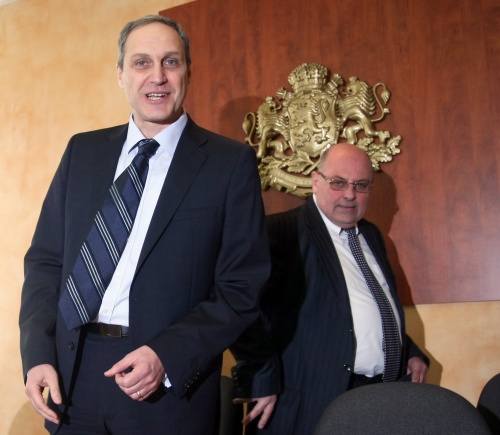 The Deputy Regional Minister, Georgi Pregiov (front), denies allegations of the opposition that he has business interests in a controversial hydroelectricity project. Photo by BGNES

The Deputy Regional Minister from the cabinet of the ruling GERB party, Georgi Pregiov, has committed conflict of interests in the controversial hydroelectricity project - ‘Tsankov Kamak.’

The information was revealed Monday by the leader of the opposition Bulgarian Socialist Party (BSP) and former Prime Minister, Sergey Stanishev, who says Pregiov is the owner of the “Arnaudov Consult” company, which monitors the ambitious large-scale project.

The Regional Ministry's press center issued a statement in the aftermath of the allegations, explaining that before being appointed as Deputy Minister, Pregiov had shares in the company “Professional Consult” in the southern city of Blagoevgrad and several other businesses, which he included in his declaration of conflict of interests. He had been one of the managers of the “Consultancy Engineering Group,” which was in consortium with “Aranaudov Consult,” but, as the Trade Register shows, Pregiov had left all these companies after becoming a member of the Citizens for European Development of Bulgaria (GERB) party cabinet.

The Regional Ministry further reminds that the Regional Development and Public Works Act defines the functions of construction control and they do not include setting of prices or deadlines for a project, but rather involve monitoring of the way the projects are carried out and their adherence to the construction process requirements.

Several days ago, Bulgarian Prime Minister Boyko Borisov revealed that prosecutors are already studying the project of the hydroelectric power plant – ‘Tsankov Kamak’, after a huge hike in the initial price was discovered.

Also last week, the Bulgarian daily Trud reported Ahmed Dogan, leader of the ethnic Turkish party Movement for Rights and Freedoms (DPS), which was a member of the ex Three-Way Coalition cabinet, took BGN 1,5 M as a consultant of the large-scale hydroelectricity projects - ‘Tsankov Kamak’, ‘Dospat’, ‘Gorna Arda’ and ‘Tundzha’ Dam. DPS has vowed to approach the Chief Prosecutor over these allegations, which they firmly deny.